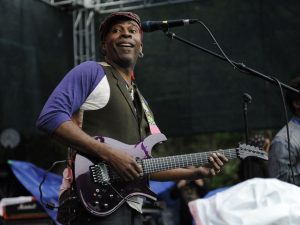 “Masque is about identity: Who am I? Really, that question has informed everything I’ve done, from the beginning of my solo career.”

Vernon Reid is speaking one recent morning as his band bus idles outside the hotel. The night before, of course, anyone in the crowd would have had no trouble answering his query: He is, among other things, a profound instrumentalist, one of the world’s great guitarists – a player so advanced, in fact, that the estimable Robert Fripp has admitted to aspiring to meet Reid’s standards “as a guitarist, musician, and human being.”

More than that: He is also a visual artist, who at this point was spending every spare moment with his laptop, finessing the digital works to be displayed right after Christmas in a New York gallery. He’s a poet and essayist, a film composer, a father and husband.

But like all the music he has played – with his first, two-time Grammy Award-winning band, Living Colour, on sessions with artists ranging from Carlos Santana to Public Enemy, Mariah Carey to the Ramones, in solo projects and countless live appearances – Other True Self, the second album by Vernon Reid & Masque, on Favored Nations, is more about search than discovery.

The title says it. In fact, the titles Reid attached to all of his own work, beginning with his solo debut Mistaken Identity and continuing with the first Favored Nations Masque CD, Known Unknown, outline a journey of self-discovery that’s well underway but far from over.

On Other True Self he exposes a vivid personal landscape. Each track illuminates one or another side of Vernon Reid: his African lineage in “Prof. Bebey,” the Latin flavor of the melodies he casts over Hank Schroy’s bass pulse and Don McKenzie’s crisp reggae rhythm bed in “Flatbush and Church Revisited,” the exhilaration of his unison sprint with keyboardist Leon Gruenbaum on “Game is Rigged,” the swirling Middle Eastern energies in “Mind of My Mind.”

Other True Self, then, is a sonic kaleidoscope, a tumble of colors and a whirl of astonishing visions. Yet as far as Reid is concerned, it’s just one step forward on a possibly endless – and endlessly rewarding – mission.

“You know, Brian Blade put out a record called Fellowship,” he explains. “I love that philosophy – a sense of fellowship within a band. We’re all on a planet hurtling through space. We’re all lonely. So we make connections. We build communities. That’s very precious, when you have a cool vibe going. And that’s what attracts me to Masque.”

But a dichotomy in that concept inhabits the music of Other True Self. Everyone in the band is a virtuoso in his own right, yet that idea of community, of chasing after meaning as a team, is central to the process. “A lot of music today is held hostage to chops,” Reid says. “I’ve never thought that way. At the same time, there’s a visceral, cathartic, and narcotic thrill in playing like you’re a bad-ass. To deny that aspect of the music is to be false. Like anyone else, I’m thrilled when I hear someone play with that kind of freedom – so there is a contradiction.”

“That’s why chemistry is so important,” he continues. “When you’re around great musicians, it can improve what you do. Leon, for example, pushes me because he’s such a phenomenal musician. He brings out the best in me. Now, when you can have wonderful musicians who fight for every scrap of space, the music will feel like that. But there’s also something to be said about spending time with that challenge. Playing at a high level is a challenge. And when the guys in the band all enjoy what the other guys are doing, that can create something fantastic.”

With a new drummer, Don McKenzie, on board, this energy is focused more tightly than ever throughout Other True Self. “Marlon Browden, who played on our first album, is a great drummer, but he decided to pursue his own music in Europe,” Reid says. “He had a super loose feel, almost a Jack DeJohnette approach, while Don is more hard-hitting. His sense of pocket is very firm. I’ve always been fortunate to work with great drummers, like Marlon and Ronald Shannon Jackson and Will Calhoun. Don is right up there at that level.”

Thus, though Reid is at the wheel, everyone in Masque is a vital member of the crew. They contribute compositionally too: Gruenbaum is the writer of “White Face,” a heavy, wall-of-guitar rocker in a slow 6/8, while McKenzie created “Kizzy,” a slow-turning mobile of glittering sounds, and Schroy contributed the enigmatic and abstract “Oxossi.”

As on previous projects, Reid also covers songs that bear a special meaning in his life. “Wild Life” was recorded originally by the Tony Williams Lifetime, with a guitar solo by Allan Holdsworth that left a strong imprint: “He has extraordinary, jaw-dropping technique,” Reid says, “but that’s not the point. I love what he does on ‘Wild Life’ because it’s so melodic and poetic.”

Depeche Mode’s “Enjoy the Silence” and Radiohead’s “National Anthem” are covered as well on Other True Self. “I love both bands,” Reid insists. “In a way, Radiohead rekindled my interest in alternative rock, which I’d kind of lost after my favorite band, Soundgarden, had broken up. And there are certain pieces of music that I just get right away. ‘Brilliant Corners’ and ‘Sidewinder,’ which are both in the jazz canon, were like that, which is why they’re on the first Masque album. And I feel the same about ‘Enjoy the Silence,’ which I’ve loved since the first time I heard it on MTV.”

Cumulatively, these tracks open a deeper dimension in Reid’s sound. Everything he’s undergone, from his infancy in London to his upbringing in Brooklyn, from the controversy and adulation unleashed by Living Colour to the birth of his daughter Idea two years ago, feeds into Other True Self. Fatherhood, in particular, stirred something fundamental in Reid – so fundamental he put his guitar aside for a month and focused only on the wonder that she had brought into his life.

In the end, though, this hiatus enhanced his playing when he picked up the instrument again. “My relationship with the guitar is not ambivalent at all,” he states. “After having played it for so long, everything I do now comes down to getting the body, the mind, the heart, and the ear to all work together. I know I can execute certain things with more finesse, but what counts more is that my playing is tied completely to the moment I’m in. It’s not this external thing of having to project the fact that I’m ‘Vernon Reid.'”

And what is “Vernon Reid”?

With that, Other True Self leads us back to the beginning – and, perhaps, to the riddle of who we are, each one of us. “You know,” Reid muses, just before he boards the bus, “I remember traveling on this train in D.C. We went past a park, where I could see this pickup basketball game. This guy got the ball and made a perfect spin-around and fade. I was like . . .”

Here, Reid breaks into a wide smile and silently applauds.

“Then it occurred to me that he had no idea that someone on a moving train had seen his move and appreciated what he did. And he never will know that. But what it means to me is that we all have an incalculable effect on the world.”

And with that, Reid is gone and on his way to the next gig, leaving a bit of the world behind him changed, through the light of his conversation and the beautiful mysteries of Other True Self.