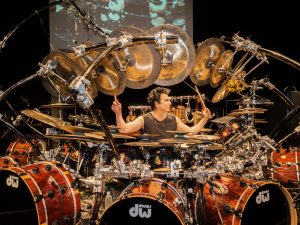 Terry Bozzio’s new Favored Nations CD, Chamber Works, recorded with Holland’s classical Metropole Orkest, might seem unexpected to those only familiar with the drummer’s greatest “hits.” That’s because Bozzio – one of the foremost rock and jazz/fusion drumming virtuosos over the past 30 years – has developed such a reputation by being a scene-stealing legend with guitar gods Frank Zappa and Jeff Beck, plus supergroups the Brecker Brothers, UK and chart topping Missing Persons.

But look at the formative years preceding Bozzio’s 1975-1978 tenure with the symphonically-influenced Zappa (a classical cliff-notes course in itself), and you’ll see the drummer’s Chamber Works roots.

Born in San Francisco in 1950, Bozzio’s studies at California’s Sir Francis Drake High School and College of Marin included both drum set and classical tympani. He played in chamber ensembles, plus the Marin and Napa County symphonies, before landing in musical theater productions and west coast jazz bands. All of which proved a perfect combination for Zappa, an impressive classical percussionist himself, and a bandleader who blended all of these styles with rock, R&B, and ample doses of satire.

“Co is my friend,” Bozzio says, “and I proposed it to him as he told me of his affiliation with the Metropole. It’s only because of him that I had the wonderful opportunity to do this.”

On Chamber Works, Bozzio plays through five lengthy movements and a closing opus with every bit as much speed, flair and ambidexterity as he did with any of his preceding ensembles. The opening “Temenos” features his drum and cymbal accents in unison with serpentining lines by the strings and wind instruments.

Bozzio’s unaccompanied intro to the 10-minute “Hypnotic” features flurries on his tom-toms – tuned to give him 2 1/3 octaves of a diatonic scale – and stacks of bell and china cymbals that the drummer actually plays melodies on.

“Untitled” more than lives up to its name. Another of Bozzio’s classical-meets-tribal intros leads to Oriental-influenced interplay between the strings, horns, and flute. The drummer again blurs the divide between drum kit and percussion as he solos midway over an extended orchestral vamp, dizzyingly using meticulously-tuned drums and cymbals as only he can.

Those cymbals get another hummingbird-like workout on “Moguli.” The tempo is a slow 7/8 time, with varying accents by the Metropole’s percussion section that leave small holes for Bozzio to work his magic within. The strings and horns build through an epic eight minutes, conjuring up Middle Eastern imagery.

On “IBO,” Bozzio duets with himself during an extended intro, often answering his tom-tom flights with mind-boggling foot patterns on his bass drums. He then creates a tribal feel that echoes legends from Gene Krupa to Elvin Jones, as the Metropole expertly accompanies melodically, harmonically, and rhythmically. The unpredictable result is akin to a John Williams movie theme re-arranged by Zappa.

Chamber Works is hardly the ever-searching Bozzio’s first go-round with an unusual drum set – or the first unusual musical situation, for that matter. His kit with UK circa 1979 was almost exclusively made up of Remo roto-toms, drums that could be tuned by tightening or loosening the surrounding floating rims. In the early-to-mid 1980s with Missing Persons, Bozzio designed an electronic kit that resembled a black desk, with what looked like coat-hangers for cymbals.

Bozzio played with Beck in the guitarist’s bass-less Guitar Shop trio with keyboardist Tony Hymas into the 1990s. Since then, he’s released several Melodic Drumming & the Ostinato videos, and recorded the far-reaching Polytown CD with guitarist David Torn and bassist Mick Karn.

The drummer’s solo recordings include Drawing the Circle; two volumes of Solo Drum Music, and Chamber Works, Bozzio’s classical predecessor for strings, woodwinds, drums and orchestra. The smaller-scale symphonic disc pointed Bozzio in a direction with which he was familiar, because of a certain previous employer.

“How could Zappa not have influenced anything I do, or have done?” Bozzio asks. “I owe him credit for everything but the work I’ve done alone in a room writing or practicing! Even then, no one would know or care if not for the international exposure and credibility I got from being associated with Frank. I only hope he’s proud of me for doing this.”

In the Chamber Works liner notes, de Kloet remembers seeing Bozzio for the first time in 1977 and relaying the meeting to Zappa, who said of the drummer, “‘He is astonishing – the fact that he’s cute doesn’t mean he can’t play.'”

Or produce, as Bozzio did Chamber Works, or compose, as he did all of the disc’s six epic pieces, which range between five and 13 minutes.

Orchestrator Martin Fondse had his work cut out for him – the Metropole features violins, violas, cellos and basses; flutes, oboes, clarinets, saxophones, French horns, trumpets and trombones; harp, guitar, bass guitar, keyboards, and a drummer and percussionist in addition to Bozzio — who’s essentially a one-man combination of those two disciplines.

“The five movements were originally written for a woodwind quintet and string quartet,” Bozzio says, “and ‘Opus 1’ was written for a chamber orchestra. I sent my original MIDI note-written scores and the string and wind parts to Martin, who arranged it for the larger ensemble to make use of brass, percussion, and the lack of a bassoon, but it holds pretty closely to my original orchestration. We made many changes together, working late into the night, to re-arrange parts to make them come through more clearly. He was a great asset and friend.”

“Having followed Bozzio’s career for a long time,” de Kloet concludes,” I think this is an essential release in his total body of work – it shows him as an amazing performer, a highly individual composer, a Stravinsky fan, a wonderful producer and also, he is easy to work with. And on a more personal note, the fact that he can play doesn’t mean he isn’t cute!”