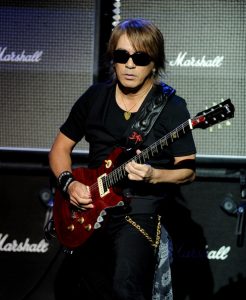 Championed in his homeland as the most renowned guitarist in all of Asia, Tak Matsumoto is equally revered as chief songwriter, guitarist and producer of the Japanese rock band, B’z. Counting a legacy of 12 albums, B’z truly means big business, having sold a combined 80 million units in Japan alone, not surprisingly making them Japan’s best-selling band in history. An acclaimed six-string virtuoso, Tak has joined such hallowed company as axe legends Jimmy Page, Joe Perry, KISS’s Ace Frehley and Slash to become the fifth guitarist in the world to have his own Gibson U.S.A. signature model, the “Tak Matsumoto Les Paul”.

A seasoned musician, Tak built his considerable chops lending his formidable talents to countless recording sessions and live performances backing numerous artists. Gratified by his work in the musical trenches, Tak was inspired to explore his talent further, forging his own voice in the creative domain. This led to the formation of B’z, a storied partnership with vocalist, Koshi Inaba, who issued their debut album in September of 1988. That very same year, Tak flexed his fingerboard muscles with his first instrumental release, Thousand Wave, a record that introduced the world to this unique musical trailblazer.

Balancing his work with B’z, Tak has continued to craft a series of celebrated solo instrumental records. 1992 saw the release of his second solo album, Wanna Go Home, followed four years later by Rock ‘n Roll Standard Club, an album of cover songs which paid homage to Tak’s musical influences. Ever the industrious artist, Tak took to the road in support of the album. 1999 was another productive year for Tak, counting a new single in 1999 and the release of his third solo album, Knockin’ ‘T Around. But it was 2002, in particular, that served as a landmark year for Tak with the Japanese release of his much heralded instrumental albums, Hana and Dragon From The West. Hana, most noticeably, garnered rave reviews, its powerfully flowing melodies evocative of scenic horizons of the Orient. The album’s bonus track, “Trinity,” finds Tak stretching the boundaries of “rock” guitar, blending different tastes in the melodies while retaining the same distinctive Japanese spirit.

Coming off a four-month nationwide stadium tour where B’z performed to over 700,000 fans in major soccer stadiums (some used in this year’s World Cup soccer tournament), the band capped off a landmark year with sold out shows in Los Angeles and San Diego, marking B’z’s first live performances in the U.S.