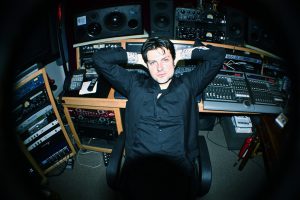 Born in Paris, France, to a musical family (his father was Conductor of the National Orchestra of Paris), Robin DiMaggio started a life-long obsession with music at the age of 2. By the time he was 16 years old, he was drumming behind Tracy Chapman at the infamous Amnesty International festival.

Robin DiMaggio soon arrived in Los Angeles, immersing himself in the emerging hip-hop and world music scenes, and in the past decade his credits already include work with David Bowie, Dr. Dre, Snoop Dogg, Mariah Carey, Steve Vai and many more. He recently completed work on the upcoming Boz Scags record. Blue Planet, with all its diversity and eclecticism, reflects how DiMaggio has been influenced and affected by various places and people around the world.