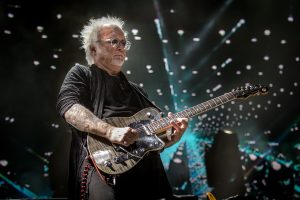 Reeves Gabrels, a Grammy-nominated guitarist/songwriter/producer best known for both his work with David Bowie and his aggressive guitar style that combines the visceral energy of rock, the harmonic sophistication of jazz, the emotional honesty of blues and country, and an ear for the unusual, is set to release his Favored Nations debut, ROCKONICA.

Reeves professional career path began in 1987 when journalist/publicist Sara Terry introduced him to David Bowie. As a result, a friendship ensued and in 1988 he moved to London to begin working with Bowie in an experimental project that later evolved into Tin Machine. While living in London, he also recorded with The Mission, Deaf School, and Sandie Shaw. Tin Machine released three albums between 1988 and 1992. During that time Gabrels also composed soundtracks for PBS and David Lynch-Mark Frost Productions, performed with two Boston bands, the Bentmen and The Atom Said, and recorded several original compositions that were featured on a variety of major label guitar compilations.

After Tin Machine was disbanded Bowie and Gabrels continued their working partnership, as the guitarist lent his playing and songwriting skills on such ‘90s era Bowie releases as 1993’s BLACK TIE WHITE NOISE, and 1995’s OUTSIDE. On any given night of the worldwide tour for OUTSIDE with Bowie, Gabrels could be found as front man with his own band in the opening band slot, then performing with Nine Inch Nails, and finishing the evening playing lead guitar with David Bowie. During that time Gabrels also released his own star studded solo release, 1995’s THE SACRED SQUALL OF NOW which included guest spots from Bowie, Frank Black, Jeffrey Gaines, and actor Gary Oldman. Gabrels also composed the soundtrack for the premiere episode of the PBS series Discovering Women, performed on Jeffrey Gaines’ SOMEWHAT SLIGHTLY DAZED, and recorded NIGHT IN AMNESIA, an avant-roots electric acoustic collaboration with slide guitarist Dave Tronzo under the collective name Tronzo/Gabrels.

At the end of the OUTSIDE tour in August 1996, Gabrels and Bowie immediately entered the studio to begin work on what became the EARTHLING album which Reeves co-produced and largely co-wrote, and was nominated for two Grammy Awards in 1998. At the completion of the recording, Reeves went into the studio with the band Sister Machine Gun. Gabrels post-industrial/techno/rock playing peppers this album, released on TVT in the summer of 1997.

The release of EARTHLING in February 1997 was followed by yet another world tour ending in December of the same year. During this touring period, Gabrels somehow found time to play guitar on the very successful Cure single, Wrong Number, as well as finishing off the year by playing a series of live dates with them. Early 1998 brought several new escapades … playing guitar on new albums by artists as diverse as Jeffrey Gaines, Natalie Imbruglia, and Alicia’s Attic as well as playing on and co-producing the David Bowie live album LIVE AND WELL.COM. Later in the year found Gabrels working with Public Enemy (He Got Game), adding lead guitar and assorted effects to Dave Navarro demos and playing slide guitar on the Rolling Stones’ single Out Of Control. He finished out the year by composing and recording the soundtrack for The Farmer’s Wife, a six-hour episodic documentary for PBS.

1999 was dedicated to three main projects: the production and co-writing of the songs and instrumental music for the Eidos/Quantic Dream CD-Rom/Playstation game Omikron (released under the title The Nomad Soul in the U.K.) with Bowie, producing and co-writing the David Bowie album HOURS, and recording his own solo album, ULYSSES (della notte).

By the dawn of the 21st century Gabrels had decided to split from Bowie and set out on his own for good. The year 2000 brought a few new surprises. Gabrels relocated to Los Angeles. The ULYSSES album was nominated by Yahoo as “Best Internet Only” album of the year, and was shortly afterwards released to retail by Emagine Entertainment. Reeves also played the Jimi Hendrix birthday celebration at Seattle’s Experience Music Project.

2001 began with a phone call from Sharon Osbourne to work with Ozzy that led to a three-month commitment in the studio working on songs that eventually became Ozzy’s first solo album in years. Upon seeing sunlight again, Gabrels indulged in some East Coast dates with his band, as well as another gig at the Experience Music Project, and a series of West Coast shows with the Reeves Gabrels/Wayne Kramer (of MC5 fame) band. In 2001, MTV licensed and used ULYSSES for its shows Road Rules and Real World. Reeves wound up the year going into the studio to record tracks with Mick Jagger.

Reeves then went into the studio to spend time working on ROCKONICA, his latest solo album, which MTV asked to license for the fall Road Rules season. On ROCKONICA Gabrels explores sonic extremes with a great, adaptive intuition for what each song needs most. He shows that his limitless technical and compositional skills can still shine without restraint. Guitar Player’s Editor In Chief, Michael Molenda says “Gabrels is one of those guitar players that, quite simply, redefines guitarcraft – a bona fide 21st-century guitar god who deserves massive amounts of Justin Timberlake-style fame.”

He will go down as one of the true originals in the guitar-hero pantheon, even as his fusion of fretwork and computer processing questions and redefines that instrument’s very place in the rock canon.