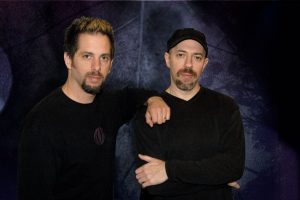 Practice might make perfect, but no practice can make magic. One night in autumn of 2000, guitar master John Petrucci and keyboard wonder Jordan Rudess — both of prog rock heroes Dream Theater — performed as a duo for the first time at the intimate Helen Hayes Performing Arts Center in Nyack, New York now known as the Helen Hayes Theatre Company. The musicians wrote nine compositions for the concert during a Dream Theater tour in the weeks before, but none were finished. Petrucci and Rudess looked over the skeleton charts once, but never rehearsed.

Nevertheless, the duo had the confidence to record the performance. Thank god.

What resulted was a display of unparalleled musicianship and spontaneity so spectacular, when Steve Vai recently heard the album for the first time, he knew within seconds he wanted his Favored Nations label to properly release it. Fusing top-notch genre-hopping performances with fine finesse, and a little magic, “An Evening with …” is one of the most adventurous instrumental albums to date.

“We were both feeling a little extra excitement because it was so unusual and we had never played the songs before,” Rudess recalled. “And that’s what created the magic in it. There was that little extra adrenaline rush going on.”

“And it was cool,” added Petrucci, “’cause it left us a lot more room for improvisation, which was what we wanted to focus on. We approached it with a jazz mentality. Come up with some cool heads and just improvise a lot in the middle and then come back to the theme and see how it goes.”

To those loosely familiar with the experi-metal Dream Theater, who scored a mainstream hit in 1992 with “Pull Me Under,” hearing Petrucci talk jazz might sound pretentious. However, to true fans who have followed the guitar virtuoso through his various side projects, like Liquid Tension Experiment and the Explorer’s Club, or followed Rudess’s career through touring with Jan Hammer or recording with David Bowie, the album makes more sense.

“We never really talked about the direction,” Petrucci said. “Just knowing it would be a duo and picturing it being piano and acoustic, the songs just shaped up in that light automatically.”

It’s clear to them, however, why “An Evening With …” surprises listeners. “This CD is nothing like Dream Theater,” Petrucci said. “I don’t think a lot of people know that both of us have a long history of schooling.”

Petrucci, in fact, has been playing guitar since he was 12 and studied at the Berklee College of Music, where he formed the first incarnation of Dream Theater, while Rudess entered the Juilliard School of Music as a 9 year old piano prodigy and was groomed for a classical career. When the two first got together in 1998 for Liquid Tension Experiment, however, it was clear their collaborations would not be about individual accomplishments.

“The chemistry was an automatic thing between the two of us,” Petrucci said. “Every writing session that we have there’s just total understanding and great communication. And when we play live and improvise and trade, we’re just locked in.” Added Rudess, “We both have a very similar view of our instruments and a high level of expectation about the way they should be played and what we’re trying to get out of them.”

That rare chemistry is on fine display within the first minutes of “An Evening With …,” as the two seamlessly build “Furia Taurina” from a silent spook film soundtrack to a Latin hoe-down. “It was the icebreaker of the night and sort of set the tone,” Petrucci said.

In addition to the concert performance, Petrucci and Rudess have added three previously unreleased gems: the ambitious “A State of Grace,” first written for Liquid Tension Experiment; the studio version of “Bite of the Mosquito,” a Petrucci showcase originally recorded live; and the beautiful “The Rena Song,” an ode to Petrucci’s wife.

It’s fitting “An Evening With …” recognizes Rena, seeing as how the women in the duo’s lives played an integral part in making the album happen. The concert itself was a benefit for the Helen Hayes Performing Arts Center which was conceived of and produced by Rudess’ wife Danielle, and it was Petrucci’s wife who suggested they record it.

Special gratitude is also due to longtime Dream Theater engineer Doug Oberkircher, who recorded the concert. “The night before that evening Doug’s wife was having a baby,” Petrucci recalled. “I said, ‘You can’t possibly do this,’ and he was like, ‘I’ll come back and do the gig.'”