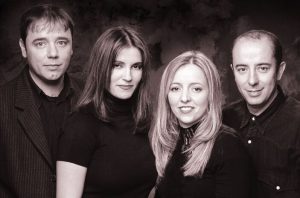 Coming up in an era where conforming to one musical style often meant larger scale commercial success, Stanley Jordan achieved legendary status around the world by defying all simple categorizations. The first artist signed to the newly revitalized Blue Note Records in the mid-80s, the guitarist quickly established himself as a jazz virtuoso by virtue of his trademark “tapping technique.” Yet he never limited himself, creating modern instrumental classics out of rock standards (“Stairway to Heaven,” from 1988’s Flying Home) and treasured classical pieces (“Bolero,” from 1994’s Bolero).

Jordan’s unique association with Novecento-writer/producer siblings Lino (guitar), Pino (keyboards) and Rossanna (bass) Nicolosi, with Lino’s wife Dora as lead singer-grew out of his career-long commitment to creative and cultural exploration. “Many musicians started canceling their travel plans after 9/11, but I deliberately chose to go overseas more,” Jordan says. “I decided to work with Novecento after a friend told me about this Italian group that played great instrumental pop. I hope this project will help promote friendship at a difficult time for world affairs. We recently played in the United Arab Emirates and the welcome we received was fantastic!”

Such is bound to be the case stateside when listeners become reacquainted with Jordan’s amazing musicianship. The opener “Tell Me Something” is a dreamy, film score like seduction, its dramatic orchestral ambience enhanced by Dora’s lush vocals and Jordan’s elegant acoustic guitar melody. The first scheduled single is “Flying to the Sky,” a moody, easy grooving soul-jazz tune featuring a soaring electric guitar and trumpet melody and Pino’s playful keyboard lines. Jordan’s lead guitar lines alternate moods on the next two pieces, the blues and jazz drenched “Too Close To The Sun” (featuring a languid string melody and sassy horns on the rise) and the punchy rock-oriented vocal “Sky Flower,” highlighted by lead singer Gregg Brown, Rossana’s throbbing bass and Jordan’s feisty, breakneck speed electric licks.

“Destination of My Heart” takes Jordan and Novecento back to a bluesy jazz realm, with a colorful guitar melody duetting with Dora’s soaring wordless vocals. Listeners in a mellow mood will be happily jolted out of their comfort zone with the fiery mix of dense percussion, organ harmonies and blistering lead guitar lines of “Spring”. It’s the disc’s one true rockin’ jam session amidst the overall cool vibe, which continues beautifully on the ultra-soulful title track. Dreams of Peace closes with two snappy funk numbers, the spirited, horn-embellished “Easy Love” (with some of Jordan’s most lyrical playing ever) and the strutting, R&B-influenced sing-along rocker “I Can Show You Something.”

Jordan’s collaboration with Novecento-which has included extensive touring in Europe-will no doubt heighten stateside awareness of the Nicolosis’ music, which has been part of the European landscape since their 1984 debut. To date, the band’s best known international releases have been Wait For Me (1994, on ZYX Music) and Day & Night (Atlantic, 1996). Other recordings in their catalog include Shine, Leaving Now and Dreamland.

Since 1997, the principals in Novecento have balanced a busy performance schedule with a thriving record production company and studio, Nicolosi Productions, dedicated to creating globally successful and critically acclaimed jazz/fusion recordings. Among their most renowned sessions are Billy Preston’s You and I, Billy Cobham’s Drum On Voice (released by 24 Sony Music Group affiliated companies), Jeff Berlin’s In Harmony’s Way, Toots Thielemans’ The Live Takes, Gary Husband’s The Things I See and a self titled release by The Danny Gottlieb Trio.

Jordan’s overwhelming acclaim was due in large part to his discovery of a new way to play the guitar. Although he was not the first to use tapping-a technique designed to achieve a level of orchestral complexity equaling that of a keyboard instrument-his expertise gave him the ability to play two completely independent lines or “two guitars” at the same time. He earned a degree in music theory and composition from Princeton, but chose to start out professionally as a street musician playing in Philadelphia, New York and towns in the Midwest and the South.

His second Blue Note disc, Magic Touch (1985), was #1 on Billboard’s Jazz Chart for 51 weeks, was certified gold in the U.S. and Japan and earned him two Grammy nominations; its cover of Michael Jackson’s “The Lady in My Life” is considered a contemporary jazz standard. On the strength of this and subsequent best selling recordings (Flying Home, the Grammy nominated Cornucopia, Street Talk and the live set Stolen Moments), Jordan became a media sensation, appearing in films, late night TV shows, and on VH1 and BET.

Jordan spoke plainly about his penchant for perfectionism and the pressures of being a guitar virtuoso: “I have this sound inside me that is greater than anything I have ever played on my guitar. Developing a new technique helped me get closer to it, but that only took me so far. I found that I had to look inward and develop myself physically, emotionally, mentally and spiritually so that I could overcome all roadblocks to making that inner music. Until I had achieved that, nothing else would do. I didn’t want to release any music at all if it wasn’t going to be my best.” As a result, while Jordan made a great deal of music in the 90s, very little of it was ever recorded or commercially released; his last album before the current disc with Novecento was 1998’s Live in New York).

When Jordan joins Novecento onstage Stateside in the wake of the release of Dreams of Peace, he will bring his desire for spiritual healing along with the virtuosity his fans have longed for years to reconnect with. “Right now, I feel a strong desire to bring my music to the people-not just for entertainment, but also for inspiration and healing,” he says. “And I feel I’ve found a good balance. I’m working with more discipline and devotion than ever – I feel good about the music I’m making these days. For the first time, I can truly say there is absolutely nothing stopping me from putting together the music just as I hear it and feel it inside.”