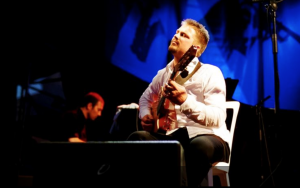 In just a few short years UK-based Swiss guitarist Nicolas Meier has carved a reputation out as one of the UK’s most original guitarists. Drawing on a love of Turkish, Eastern music, Flamenco, Tango all mix with jazz, Meier has developed his own unique sound with his regular group (latest release was his eight album with his full band.) See Media page for more details.

London based Swiss guitarist Nicolas Meier is one of the stars of a vibrant British jazz scene, his trademark sound, as heard on his MGP Records and Naim albums, a mixture of Methenyesque jazz and spicy Turkish and world music rhythms.

While in 2006 Meier and his band won the prestigious Grand Prize Of The Jury and 1st Prize Jazz Guitar at Jazz a Juan Revelations 2006: A competition open to the finest new jazz musicians and bands in Europe and run by the legendary Jazz A Juan Festival. He has become increasingly well known in his adopted country where his Nicolas Meier Group featuring some incredible musicians (listed below) has toured extensively for the last 8 years.

Meier draws on a multitude of influences: Jazz, Flamenco, Latin and middle-eastern music are all passionately explored in a series of heartfelt acoustic modern jazz originals and all represent part of Meier’s musical and personal world. His wife Songul is Turkish and he has spent time there and in Spain and ‘Orient’ draws on the melodies and rhythms of both countries. Writing in the Guardian, John Fordham described Meier as” elegant in tone and bubbling with ideas… his originality as a writer, a player and a team leader dispatches any doubts” and described his debut album Orient as ‘a seductive balance of strong themes, inventive improvising and dynamic variety’.

Meier who was born in 73 first picked up the guitar when he was 12. His parents, both art lovers, had wide-ranging musical tastes and he was exposed to classical, jazz, Latin, flamenco, rock and pop. And it was an early gift from his father of Joe Satriani’s legendary ‘Surfing with the Aliens’ and Tony MacAlpine’s Maximum Security (major intelligent rock guitar-god albums) that first really convinced a young Meier to get practicing. Perhaps his old man was worried because he was subsequently taken on a family outing to the Montreux Jazz festival (in what would become an annual pilgrimage) where he heard Carlos Santana with special guest Wayne Shorter. And later that summer Meier was blown away when he saw John McLaughlin’s trio in Antibes (Trilok Gurtu and Jeff Berlin). In fact Mclaughlin’s album Live at the Royal Festival Hall would be a major influence on Meier with its mix of many styles.

Interestingly Meier’s passion for both rock and jazz persists to this day. Something he partly credits to his teacher Francis Coletta (at the Conservatoire Fribourg) who while inspiring a profound love of jazz and world music encouraged the young man to transcribe rock solos as well! In fact Meier is one of the rare musicians who plays both metal and jazz and has written books on both : ‘Heavy Metal part I: Rhythm Guitar’ and ‘Jazz part I: Chord Tones’. Both published by « www.ibreathemusic.com ». Meier states of his two seemingly divergent loves :“I deeply love both styles. There is magic in each style that the other one doesn’t have. I just love metal’s power and energy and at the same time I love jazz’s deep emotion. Both styles can give high energy but in different directions or different worlds”.

Meier studied arranging with Max Jendly and Francis Boland before earning a scholarship to Berklee in Boston, USA and immersing himself in classic Amercian jazz (Parker, Coltrane, Miles etc) and playing acoustic jazz and fusion. He graduated and returned to Switzerland in 98 and formed the « Meier Group » who became festival regulars and he jammed in Montreux with the likes of Rachelle Ferrel, George Duke, Macy Gray and Will Calhoun. But Meier missed the vibe of Boston, the energy of America and looking around for somewhere that combined European culture and American ‘drive’ he settled on London as the perfect synthesis. Arriving in London Meier met drummer Asaf Sirkis who he credits with helping open his ears to Middle-Eastern music as well as helping him find his feet in London. “He is such a passionate player that I just had to keep playing with him whenever I could and I met Gilad Atzmon through him and many other great players”.

Meier’s Turkish wife Songul is a major influence on his music with the composition Last Rose on his debut album Orient a passionate tribute to her and his new album Silence Talks closes with A Rose In The Pyrenees remembering a happy holiday together. And they have travelled together in her home land. “I fell in love with Turkish rhythms, their instruments, their traditional songs and even their pop music which is very different to western pop drawing on eastern influences’ Other influences include pianist Chick Corea (who moves effortlessly between fusion and acoustic contexts) and of course Pat Metheny (who isn’t? asks Meier) but also the classic guitar album “Friday Night in San Francisco” by Al Di Meola, Paco de Lucia and John McLaughlin.“I loved all the styles they were playing, Latin and tango with Al, Flamenco with Paco, and Indian music with John. Which is one of the reasons that I love all these styles of music and wanted to explore them on this album.”He also cites the great Flamenco guitarist Tomatito as an influence from time spent in Sevilla and Barcelona with his friend and piano player Jose Reinoso.

Meier’s sound is rooted in his love of playing jazz on acoustic guitar, especially his Godin nylon string guitar. It’s a sound that lends itself especially to flamenco and middle-eastern music and it’s all these influences and more that Meier has so brilliantly fused together in his music. He also plays fretless acoustic guitar, which sounds something like a cross between an acoustic guitar and the oud (an Arabic stringed instrument) and the Saz, a traditional Turkish instrument. While his new album also features fretted and steel guitars, Godin glissentar (11 stringed insturment) and a baglama.

As well as leading his own band, he has also recorded “Guidance” featuring Vivaldi’s 4 Seasons with a guitar orchestra (acoustic, electric & synth guitars) for American Classical label Centaur and he continues to lead “Seven7” his nu-metal band as after three full length albums which have had outstanding reviews. www.seven7.name.

Lately Meier had the incredible chance to play alongside one of the most influencial guitarist, Mr Jeff Beck. The Jeff Beck Band features Lizzie Ball on violin, Rhonda Smith on bass, Jonathan Joseph on drums and Nicolas on acoustic, electric and synth guitars. It all started with an Autumn US/Canadian tour in 2013. The tour was co-headlined between Jeff Beck and Brian Wilson (Beach Boys). More to come…