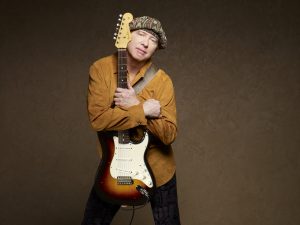 If you’ve seen the films “That Thing You Do” or “My Big Fat Greek Wedding,” listened to rock-guitar virtuoso Steve Vai, heard recent recordings by the legendary Yardbirds, or appreciated the talents of internationally renowned drummers Greg Bissonette, Virgil Donati or Mike Mangini, then you may already be familiar with the wealth of musical projects Neil Citron has worked on. Whether producing, engineering, recording, mixing, editing or playing guitar, Citron brings the highest professional standard to every project he works on. For “That Thing You Do,” Tom Hanks relied on Citron’s extensive knowledge of the guitar to teach the actors the subtleties needed for absolute realism in this performance film. Citron was on the set for all filming to advise Hanks on flawless execution of the guitar- and bass-playing, and it was Citron who instructed the actors on their instruments prior to filming. “None of this would have been possible if it weren’t for you,” Hanks told Citron upon viewing the final cut. Under Citron’s expert instruction, the two guitarists and bassist became accomplished enough to play live in concert to promote the film in Japan. Citron was also asked to play guitar parts on all band songs on the film’s soundtrack, including multiple evolutionary versions of the title song, from the embryonic “garage-band” scene to the slick final “That Thing You Do” hit version. On the “My Big Fat Greek Wedding” soundtrack, Citron was brought in for his expertise with Pro Tools digital recording software and hardware. Citron edited all the sonic cues, constructing actual songs from mere snippets of music. When the star and writer-director of “My Big Fat Greek Wedding,” Nia Vardalos, needed the skills of an experienced Pro Tools editor and engineer for behind-the-scenes commentary on the DVD version of the film, Citron was her choice. When Steve Vai decided to record his concerts while touring the world, he enlisted Citron’s talents to build a portable recording rig. Vai also brought Citron on the road to record the performances, and had him master all of the recordings afterward. For the last six years, Citron has worked closely on every aspect of Vai’s recorded projects, from equipment selection and miking to mixing and mastering. Citron has also written songs for several films, including “Scream Until You Like It” for “Ghoulies 2 “Dino de Laurentiis and “Trick or Treat” for Michael S. Murphy’s production of the same name (Bill & Ted’s Excellent Adventure fame). With producer/song writer Paul Sabu, Citron has written more than 50 songs for Chrysalis publishing, and Citron now continues his prolific composing career. In 2002, Citron released a solo album of guitar instrumentals, “Absolute,” with the Favored Nations record company, and he is currently finishing a second such album for the label. In 2000 Citron released his first instrumental CD for Avalon records and toured to support it as well. As a guitar player, Citron has worked on many recordings of artists from all over the world. On these projects, Citron performed on acoustic and electric guitars, as well as providing background vocals when needed. Dedicated to anything he pursues, Citron holds a sixth-degree black belt in several Korean martial arts — tae kwon-do, hapkido and sib pal gi (Korean kung fu) — as well as a third-degree black belt in tang soo do, in which he trained with actor Chuck Norris. Over the years, Citron has himself trained many students to attain their black belts. In his rigorous, disciplined practice, Citron has mastered patience, perseverance and commitment to nothing less than doing the best job possible — always to full, professional completion. Whatever hat he’s wearing, be it producer, studio/live-concert/mastering engineer, performer, composer, arranger, Pro Tools consultant or sound editor, Citron brings an extraordinary number of expert skills to the table — not the least of which are his well-developed “people” skills. Keeping a cool head under deadline pressure, Neil Citron delivers his projects on time. Every time.