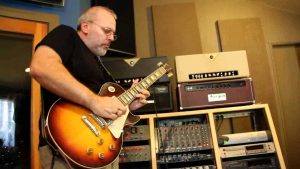 Hello, I’m Mike Keneally, writing things about myself. What’s happening with you? You good? Here are a few words about my life in music. I appreciate you reading them, if in fact you do: I started playing keyboard when I was seven, when my parents gave me an electronic organ for Christmas. It was a total box of magic to me. For my eleventh birthday I got a guitar and that was a whole different kind of beast, one that I loved just as much. I played both instruments obsessively while I was growing up. I loved The Beatles, too, to an unreasonable degree, starting when I was five years old, and over time that love extended to (I’m writing a list now) Frank Zappa, ELP, Alice Cooper, The Rolling Stones, Steely Dan, Todd Rundgren, Stevie Wonder, Yes, The Beach Boys, Henry Cow, Joni Mitchell, Gentle Giant, Sly Stone, The Residents, Miles Davis, John Coltrane, Steve Reich, XTC, Radiohead and a million other incredible people. They Might Be Giants too, they’ve done some unbelievable stuff. Beefheart obviously. Thelonious Monk, sheesh. Laurie Anderson is badass too. Crimson! And Tull! Let’s talk Thomas Dolby and Leonard Bernstein for a second! All of those influences and countless others have found their way into my music; music which, I hope, doesn’t really sound like any of it. I was a weird kid, and I slowly learned to adapt in different circumstances, except when I didn’t. To the extent that I did, this came in handy when I was 25 years old, in late 1987, and got hired to play guitar and keyboard with Frank Zappa, my ultimate musical hero when I was growing up. It was also my first real professional gig as a musician, and it came with a lot of hard and fast learning, or not. It was a mind-blowing experience in every way, literally a dream come true, but also far more than that. I feel the repercussions every day. (Just a sec. I’m veering off-narrative here, but do you see over there where it says I’m the leading progressive-rock genius etc.? [Bill Meredith wrote that by the way, thank you Bill!] Anyway, is that really true? What do you guys think? Tell you what, I’ll count to three, and then you all yell out what you think about it. One. Two! THREE! Hey, I couldn’t hear anything!) Back to my life story here. It took me a while to recover after the Zappa tour, and decide on a next step, but as the 90s got underway I eventually got a solo career going (while also working with Frank’s sons in the group Z, and then playing in Steve Vai’s band for six years. Both extremely fun and educational experiences).

Some friends of mine (Jeff and Suzanne Forrest, thank you!) in San Diego started a label, and I signed with Immune Records and did eight audio or video projects with them from 1992 to 1998 – this was when I did hat., Boil That Dust Speck and Sluggo! as well as other titles. Then my pal Scott Chatfield and I formed Exowax Recordings in 1999, and starting with the instrumental one-man-band album Nonkertompf we unleashed another twenty or so Keneally releases, including regular albums, EPs, limited editions with DVDs or bonus albums, etc. Exowax merrily continues pumping out delicious audio for you, to this very freakin’ day. I started playing live with my own bands a lot in the late 90s, playing insanely intricate stuff, improvising a lot and doing a lot of crazy things onstage, but not quite settling into a jam band scene, or a fusion scene, or an alternative scene, or a prog scene, but (I guess?) combining something of all of that, without ever attempting to do anything specific genre-wise at all; I just keep trying to make music that I enjoy hearing. Add in the energy we get from the many varied and wonderful music-lovers we’ve played for around the world, and it’s all been an extraordinary thing for me to be a part of. I’m endlessly grateful to all the musicians who’ve played my music through they years, and to all the people who’ve enjoyed it. Sometime around 2000 I started occasionally seeing brown triangles, giving me musical instruction according to some arcane outerplanetary notational system. This would happen, sometimes, when I was playing guitar onstage with my eyes closed. After a couple of years, it stopped. I think it helped my playing for good, and I enjoyed it a lot. In 2006 I started writing songs with Andy Partridge, former leader of XTC and songwriting hero of mine. Six years later, I put out an album called Wing Beat Fantastic: Songs Written By Mike Keneally & Andy Partridge. Working with Andy was another fairly unbelievable dream come true for me, similar to working with Zappa in terms of the impact these gentlemen have had on my life. This album and other recent albums of mine have been recorded at Scott Chatfield’s studio Chatfield Manor, with ace engineer Mike Harris a constant co-conspirator. Every moment it’s possible for me to be working on music here, I do my best to take it. I love making albums. It’s an addiction. Recent releases include Scambot 1 (part one of an epic ongoing saga; Scambot 2 is presently in the works); Evidence of Humanity with drummer Marco Minnemann; and a live DVD/CD set of the Mike Keneally Band, called bakin’ @ the potato! Here’s a video from bakin’: youtube. Largely thanks to the kind patronage of Co de Kloet at NTR Music in the Netherlands, I’ve also written some orchestral pieces (sometimes with myself as guitar soloist); the most notable is the 52-minute suite The Universe Will Provide, recorded with Holland’s Metropole Orkest and released by NPS Music/Favored Nations in 2003. No other musical experience compares to playing live with an orchestra. For an electric guitarist it’s a real challenge to create the proper space as a soloist, without become overwhelming with volume, and finding a dynamic which feels of a piece with the orchestration. I’d love to do more of it and continue refining the process. My new album on Exowax Recordings is You Must Be This Tall. It’s one of my crazier releases; mostly instrumental, although there are a few key vocal tracks on it. In a way it might be my most focused and ambitious album yet; it’s a 12-song, 44-minute rocket blast of punchy experimentalism with a lot of melodic and harmonic depth to it, if I do freaking say so. I’m not impressed with myself, you understand, but I’m totally happy with this album. I also work a lot nowadays as a member of Joe Satriani’s band, and that is really hugely fun. And I play death metal, along with Brendon Small, as a guitarist in the live band Dethklok (originated in cartoon form on the [adult swim] TV program Metalocalypse. We, the human band, play the death metal live, while the cartoon Dethklok is in rhythmic sync with us, on a huge LED screen above the stage. People go nuts. It is incredibly fun). Looking at all of it in one place, it’s a strange career I have, but it’s been more fun than a basket of warm aardvarks in the springtime.