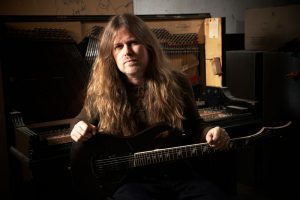 Mattias Ia Eklundh started out as a drummer at the age of six after buying Kiss’ “Destroyer” (a bribe from his mother to let her cut his hair…bad move). Son of father Bernt and mother Inga, Mattias has also four elder sisters; Nettan (Anette), Nilla (Gunilla), Gittan (Birgitta) and Mulle (Karin). The nickname Ia is, pure and simple, an abbreviation of Mattias. Seeing Frank Zappa when he was 11 changed his view on music forever and he has been a huge fan ever since. Mattias consider his major influences to be the inimitable Zappa and Kiss. At the age of 13 he changed to guitar and began practicing fanatically. Self-taught on the instrument Mattias borrowed books from the library to learn music theory. After forming the group Frozen Eyes and recording a strange self-titled album in 1988 (Bums records) Mattias moved to Copenhagen to join Danish band Fate. In 1991 Fate released “Scratch ´n Sniff” (EMI) and Mattias was hailed as “The guitar player of the 90’s” in Japanese magazines. After getting a thorough insight how the ugly showbiz-industry worked Mattias decided it was time to move on and formed Freak Kitchen in 1992. In 1995 Mattias released his first instruction video, “Freak guitar vol. 1” (Thunderstruck prod.) Among other things, Mattias demonstrates how to use hose-clips and remote controls in a very unorthodox video. He plans to shoot a “sequel” to “Freak guitar vol. 1” simply called “Freak guitar vol. 2…the revenge!” Mattias is also the man behind the ugly rubber mask, Mr Libido, and released the, to say the least, weird album “Sensually Primitive” in the spring of 1997. Eklundh frequently travels around the planet holding seminars in his strange playing style. In the fall of 1999 the beefy solo-effort Freak Guitar was released, a monumental, six-stringed roller-coaster ride. Freak Guitar’s success took everyone by surprise and it is still being released in various territories around the world, most recently by Steve Vai and Favored Nations in a brand new pressing. Consisting of 20 original tracks, Ia also included his very own interpretations of KISS´ “Detroit Rock City” and “La Bamba”. Must be heard to be believed. Before dedicating his time and effort on the work of writing, recording and producing the fourth Freak Kitchen album in winter/spring of 2000 “Dead Soul Men”, Mattias contributed an instrumental called “Yngwie 2000” on a Malmsteen tribute entitled Guitar Odyssey. Ia also participated on the Jason Becker tribute “Warmth in the Wilderness” with his orginal track “Lydia’s House”. Mattias is today considered one of the most innovative and ground breaking guitar players around with a fast growing global following from fellow “guitar nerds” to simply true music freaks. Mattias’ minimalist, home-brewed, and stripped down approach to the guitar has surprised record buyers and journalists around the world. There simply aren’t any signs of expensive guitar effects or processors involved in his playing, despite the sometimes “outlandish” sounds you hear.