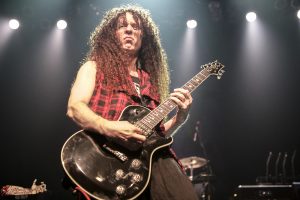 Marking his debut on Steve Vai’s Favored Nations label, Music For Speeding is 100% prime Marty Friedman. The record was conceived, written, played, produced and sweated over in Friedman’s desert oasis studio, Quaa Sound in Phoenix, Arizona. With songs that combine a new aggressive direction, the record resonates with a fiery passion, kinetic power and breadth for which Friedman’s exotic melodic style of writing and playing is well suited.

Standing shoulder to shoulder with such brutal epics as “Gimme A Dose” and “Catfight” is “Lovesorrow,” sporting what may arguably be Friedman’s most delicate, tear-jerking melody yet. An album full of sharp contrasts, Music For Speeding puts the pedal to the metal, taking the listener on a no-holds barred, feel-good rollercoaster ride of high-octane guitars and mod musical backdrops.

Besides time spent on the rock and roll battlefield with Megadeth (27 gold and platinum records to their credit), the acclaimed indie-band, Cacophony (an outfit that included future David Lee Roth guitarist, Jason Becker ) plus his trailblazing work as a solo artist, Friedman endeavors to share his profound love and knowledge of guitar playing with the world. Celebrated internationally for his pioneering six-string work, Friedman has participated in numerous music/guitar seminars and clinics all over the U.S., Japan, Europe and South America. In addition, Friedman spreads his gospel of guitar gallantry with a regular column for Guitar World, Young Guitar (Japan) and Burrn. A guitar player’s guitarist, Marty has also designed his own signature model axe with Jackson Guitars (the KE-1) that has been selling consistently since it was put on the market. Most recently, Friedman has inked an endorsement relationship with Ibanez.