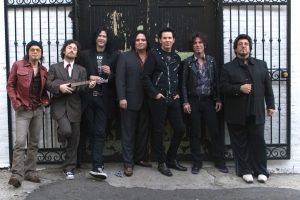 Over a year ago, Vai brought industry vet Dean Schachtel on board as Favored Nations Entertainment’s GM. With Schachtel’s Hard Rock and Metal background, it made perfect sense to start a new division at the company for Hard Rock and Metal artists. The tech-savvy Schachtel soon established a Facebook page for the label, which led to a correspondence with Tracii Guns and eventually the signing of L.A. Guns to Favored Nations/Jibboom. L.A. Guns may possibly be the first band signed through Facebook!

Born in Hollywood, Tracii Guns cut his teeth on Jimmy Page. Only six when he heard “Whole Lotta Love” on the radio, Guns parlayed his Zeppelin-inspired zest into what would become a legendary career. At twelve, an age when most guys are just discovering their equipment, Tracii already formed his first band, which morphed ultimately into L.A. Guns. Many ears, years and lineup changes later, L.A. Guns would go on to sell millions of copies worldwide of their albums “L.A. Guns” and “Cocked and Loaded.”

The original L.A. Guns line-up featured a certain Axl Rose as vocalist, and shortly after he left the band to form Hollywood Rose, Tracii agreed to join him, merging the two bands into Guns ‘N’ Roses. However, Tracii’s tenure with G ‘N’ R was short-lived, and he returned to his first love, finalizing what is widely regarded as the classic L.A. Guns line-up.

L.A. Guns went on to sell more than 6,000,000 albums worldwide entrenching them as one of the most successful glam-metal bands of the era. However, L.A Guns have endured long past those heady days in the 80’s and early 90’s and, unlike many long since forgotten contemporaries (and a cavalcade of more recent imitators) L.A. Guns are the real deal, accept-no substitutions!