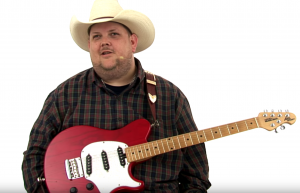 “I think Johnny Hiland is the most versatile guitar player I’ve ever heard. From Bill Monroe to Eddie Van Halen, he can play it all.” – RICKY SKAGGS

If you tried, you couldn’t make up a story this good: legally blind kid grows up in a trailer home in rural Maine. A guitar prodigy, he tours with the family band starting at age 8, wins local and regional competitions, moves to Nashville, ends up dropping jaws all over town, doing sessions with Ricky Skaggs, Toby Keith, Randy Travis, Janie Fricke and many more, and gets signed by Steve Vai when his manager leaves a demo snippet on Steve’s voicemail box.

But indeed, this is true the story of Johnny Hiland, who will make his solo debut on August 10 with his self-titled album on Vai’s Favored Nations label. Hiland, who was born with nystagmus, a condition of involuntary eye movement, grew up in Woodland, Maine and was known as the “blind boy.” According to Johnny, “my dad was determined to not hold me back from anything I wanted to do. He had been a dirt bike racer when he was younger, so I had all kinds of bicycles and snowmobiles and a little Suzuki JR50 that I rode. My mom was worried sick, but Dad would say, ‘Look, just don’t kill yourself. And those kids who say you’ll never drive a truck? Baloney. We live on a woods road, we’ve got a ’74 SuperCab, so let’s get in and go for a ride.’ And he let me drive. I had a ball, but Mom just about had a fit.”

She was more supportive of Johnny’s fascination with music. Talent ran in the family, but it ran away with Johnny. From the start he felt a ferocious devotion to his instrument, often practicing on it for long hours into the night before being ordered into bed. By the time he was eight years old he was playing well enough to join the Three Js, his family’s band. Under the auspices of the Down East Country Music Association, a regional group dedicated to promoting bluegrass and traditional American music, they began going on tours throughout New England, sometimes playing out of town every weekend of any given month. It didn’t take long for the group, and especially its prodigious guitarist, to kindle interest.

Two years after joining the Three Js Johnny made his first national splash by winning the Talent America contest, for which he was awarded a performance in New York City. Around that same time his parents took him to hear a Ricky Skaggs concert in Bangor; the experience stimulated him to start exploring beyond bluegrass into mainstream country music. His curiosity whetted, his technique sharpening, Johnny stretched his horizons in high school and started listening to an ever widening range of players: Doc Watson, Joe Satriani, Eric Johnson, Eddie Van Halen…

Yet even with all this attention his parents made sure to keep him from being swept away by too much adulation coming too quickly. He learned to be prudent with the money he earned through music, budgeting to pay for his own new strings and supplies. And he kept up his grades in school, which led to his election as president of its National Honor Society during his senior year and eventually to his admission as a history major at the University of Southern Maine

“Was I going to make something of my life?…”