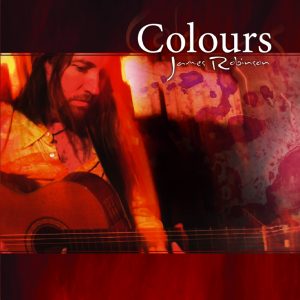 As founder of Favored Nations, the legendary Steve Vai has built a thriving creative home for guitar legends dedicated to the fostering the art of their axe, most recently adding Adrian Legg, Stanley Jordan and Tommy Emmanuel to the company’s ever diversifying roster. With the release of James Robinson’s stylistically expansive label debut Colours, Favored Nations shows a deep commitment to the future of the instrument as well.

One listen to the Bay Area native’s fanciful fingerstyling, emotionally compelling melodies and rhythmically eclectic grooves – which range from Latin and Brazilian to Middle Eastern, jazz and more straightforward pop – will no doubt inspire guitar fans the world over to echo Larry Carlton’s sentiments upon hearing Robinson’s music for the first time: “James is an extraordinary talent that deserves to be heard.” Robinson, who counts Carlton as one of his boyhood guitar idols, met Vai through Carlton, and Vai was immediately hooked: “He’s phenomenal!”

As Robinson explains in his liner notes, Colours was written to celebrate the powerful influence that the culturally diverse San Francisco Bay Area has had on him and the development of his music. “All three of my albums have shown a certain eclectic approach, incorporating jazz and flamenco and a deep sense of improvisation, but I decided for artistic reasons after the first album, to focus exclusively on the acoustic guitar,” he says. “The notion of Colours obviously draws from the diversity of cultures that my fans represent, and the kinds of music they have enjoyed hearing me play. Aside from California natives, my shows draw people from all parts of the world. They inspire me to draw from the music of their cultures. It’s a very mutual relationship.

“More technically, Colours is about the palette of chords and melodies and what each note means against each chord,” adds Robinson, who has been stubbornly committed to playing his gloriously well-worn Takamine Hirade 9 over any other axe for over 15 years. “It’s not a random process. The key to making a great recording is keeping the compositions interesting and the playing style fresh. In my live performances, I love the open-ended ability to improvise, and the challenge for a studio recording is scaling that down without losing the spontaneity. The feeling and flow of the tracks is important, and it’s fun to incorporate so many different textures among the many cultural influences.”

Robinson gets into a slight stream of consciousness mode as he discusses the variation among the tracks of Colours: “The album has a powerful sense of groove throughout, but ‘God’s Grace’ is a moody little jazz ballad that’s more about harmony than rhythm. ‘Wave Upon Wave’ has an intense percussive intro and a marching groove throughout, but the chords are developed very simply under the melody. I never do a remake unless I approach it in a different way from the original, so ‘Six Giant Steps to Seven’ takes John Coltrane’s ‘Giant Steps” in a unique direction, starting in 7/8 before playing the changes in 6/8. ‘Peace of Spirit’ has a gentle Brazilian feel to it in jazz 6/8 time. ‘Argentina’ has a nice string arrangement and easy flamenco feeling, but isn’t specifically Argentine in style. The song’s bassist Gordon Stevens told me about the creator of the standup bass he uses, who escaped from Italy in World War II and migrated to Argentina. ‘Colours of Awakening’ has a straightforward pop, almost funk flavor and features Gary Brown doing a ‘slap bass’ technique to drive the groove.”

Other key tracks on Colours include the easy loping, thoughtful and moody “Days Have Passed,” the joyfully optimistic, very danceable “Look To The Skies,” the lushly romantic yet dramatically percussive “Younger Moon” (one of Colours’ best showcases for Robinson’s powerful fingerstyling technique) and, closing the set, the easygoing, sparsely arranged “It’s A Simple Game,” whose rootsy energy paints a cool musical portrait of a dusty Western trail.

The twelfth of thirteen children, James Robinson grew up in the San Jose suburb of Campbell, inspired to learn classical piano at age eight after many years falling asleep to the sounds of his siblings practicing in the next room. With numerous musical siblings (six of his eight brothers played the guitar), he had a vast array of musical inspirations, from an older brother’s blues band to the brilliant work of Al Di Miola and Paco De Lucia on their 1980 recording Friday Night in San Francisco. Although he began a love affair with jazz fusion via the works of Allan Holdsworth, Ralph Towner and Larry Carlton (particularly L.C.’s unforgettable solo on “Mulberry Street”), and formed a Rush/Zepplin cover band in high school, most of Robinson’s educational pursuits and earliest professional endeavors revolved around classical music, which he began studying at 15.

A consummate working guitarist, Robinson played in all types of musical settings over the years while also teaching private lessons to hundreds of students (one of them is currently a member of the popular band Trapt). “I found that learning to play classical guitar offers a deep foundation and understanding for all styles, and I’ve always passed that on to my students,” he says. “Over the years, even though I was successful as a guitarist, I had a yearning to become more of a consummate musician, and then develop as an artist. It wasn’t enough to play gigs and perform other people’s music, I really had to start creating and producing my own.”

The magnificent Colours points to a brilliant, sky’s the limit future for a guitarist who will be conquering the instrumental world for years to come. “There’s no one part of the journey that stands out, but it’s the journey itself that has been the greatest blessing,” Robinson says. “As my artistry has developed, I’ve gone deeper into my music and found new, fresh and creative ways to express how I see the world. Music has given so much back to me, and it’s always been exciting to share that excitement with audiences and feel their positive encouragement as well. Anytime I’m given the chance to get onstage or in the studio to make new music, I feel this burning desire take over and the excitement of the process keeps the ideas flowing.”