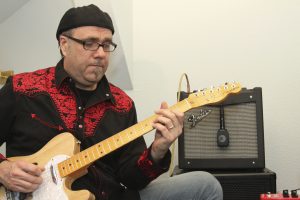 An unsung guitar hero from Milwaukee, Wisconsin, where he grew up just a few miles from the Waukesha birthplace of the late, great guitarist-inventor Les Paul, Greg Koch has established himself within six-string circles as a masterful technician, accomplished clinician (for Fender) and general bad-ass guit-picker. No less than guitar virtuoso Steve Vai noted Koch’s six-string prowess and promptly signed signed him to his Favored Nations label in 2001. Tom Wheeler from Guitar Player magazine hailed him as “fiendishly talented” while other critics have called him everything from “a twisted guitar genius” to “the best kept secret in the guitar firmament.” On From The Attic, his 12th release overall as a leader and third for Germany’s ZYX/Peppercake label, the veteran guitar virtuoso joins bassist Tom Good and drummer Del Bennett for an eclectic, hard-hitting program full of incendiary licks and audacious fretboard tricks. Recorded remarkably quickly (“We did the ten tracks in roughly 11 hours,” Koch explains) in the attic of guitarist-engineer Chris Hanson’s Victorian home on Milwaukee’s East Side, these rockin’, bluesy originals are imbued with Koch’s trademark searing licks and typically clever lyrics. From the blistering, Magic Sam-inspired boogie “Leg Up Foot Out” to the urgent blues inflected “Nova Scotia Cold,” from the elegant fingerstyle instrumental ballad “Sleep Tight” to the wild chicken-picking romp “Picked On,” Koch and his crew wail with uncanny tightness and authority. “Trouble” is a growling funk-blues number written about Koch’s first encounter with his wife-to-be (“Her middle name was trouble, her last name is mine”) while “Agree To Disagree” addresses the guitarist’s ongoing conflict with the staunch point’s of view of loved ones. “Here We Go Again” is a rich, r&b flavored ballad featuring some lyrical, legato guitar work by Koch and the aggressively funky “Happy Versus Right” recalls classic Red Hot Chili Peppers slamming down a thick groove. Koch flaunts some wicked wahwah-inflected slide guitar licks on the mellow “Twice the Man” and they close out the collection with the anthemic, classic rock jam “You’ll Rock and Like It,” which sounds like an encounter between Jeff Beck and AC/DC.” “The whole gist of this record is kind of where I started from in my career,” says Koch of From The Attic. “It’s basically tunes with cool guitar things. And I fi nd that if you can have nice little blasts within the confi nes of a short tune, it’s much more digestible.” And though Koch may be consciously trying to simplify his six-string onslaught on this trio recording, his natural fretboard fusillades ultimately come to the fore. In its 2001 feature story, Guitar Player magazine described Koch’s inherently pyrotechnic approach this way: “An impossible stream of riffs jumps off of Koch’s fretboard like clowns spilling out of a VW bug – and when you’re convinced that there can be no more, out pops another one.”

Born in Milwaukee in 1966, Koch got his earliest musical infl uences from his older brother and later became infatuated with Jimi Hendrix, who remains a profound infl uence to this day. After studying jazz guitar for four years at the University of Wisconsin-Stevens Point, Koch won 1st Prize in the 1989 Bluesbreaker Guitar Showdown judged by legendary bluesman Buddy Guy. Shortly after, he formed Greg Koch and the Tone Controls, which became one of the more popular acts of the region. The band went on to win fi ve Wisconsin Area Music Awards for Blues Artist of the Year (‘93, ‘95 through ‘98), and Koch personally took in seven WAMA awards as Guitarist of the Year (‘92, ‘94 through ‘99). Koch soon found himself as a clinician for Fender, the world’s largest and most prestigious guitar and amplifi er manufacturer. Bringing together world-class chops and a humorous ability to articulate sounds and techniques with a genuine devotion to all things guitar, Koch has developed an exceptionally effective approach to conducting guitar clinics. Greg’s relationship with music publishing giant, the Hal Leonard Corporation, has also resulted in a string of top-selling guitar method books, including “Guitar Clues: Operation Pentatonic,” “Lead Licks,” “Rhythm Riffs” and Koch’s popular Hal Leonard instructional DVDs – two on the style of Stevie Ray Vaughan (approved by Jimmie Vaughan), one on Lynyrd Skynyrd, another celebrating revered blues stylists like Albert King, Albert Collins, Elmore James and Guitar Slim and one on his own twisted take on guitar called “Guitar Gristle” – have revolutionized video guitar instruction with a combination of humor, effective instruction and inspiring musical performances into a package that can only be described as “edu-tainment.” In his self-penned liner notes to his 2001 recording, The Grip, Koch described his guitaristic approach as “Chet Hendrix meeting the Kings (BB, Albert and Freddie) at the first annual Zeppelin-Holdsworth Coffee Guzzlers Hoedown.” He would subsequently showcase his over-the-top chops and wicked sense of humor on 2003’s Radio Free Gristle, 2004’s 13 x 12, 2005’s 4 Days In the South and 2007’s Live on WMSE, which showcases his fiery fretboard work in the company of bassist Roscoe Beck (longtime sideman to guitarists Robben Ford and Eric Johnson), drummer Tom Brechtlein (a former member of Ford’s Blueline band and a frequent collaborator with Chick Corea) and the charismatic Austin-based soul singer Malford Milligan (formerly the frontman for Storyville and Double Trouble). Last year’s Nation Sack had Koch teaming with Milligan and his current rhythm tandem of Good and Bennett for a collection of Koch originals (including some co-penned with Milligan) along with a cover of John Lennon’s “Jealous Guy.” Koch continues to channel all the right people on his most recent collection of blues, funk and R&B, including Jimi Hendrix, Albert King, Albert Collins, Jeff Beck and Roy Buchanan with touches of Stevie Ray Vaughan, Danny Gatton and Richie Blackmore thrown in for good measure. And he fi lters all those killer infl uences through his own slightly bent prism that is tinted with grunge, gristle and good clean fun. – BILL MILKOWSKI