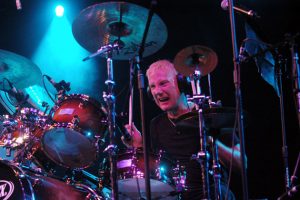 “It’s one thing to just play the music… It’s another to translate the passion that’s inside.”

“I want to be remembered as someone who can play a lot of different things and has a well-rounded style,” says Bissonette. “I’m always trying to learn as much as I can about various forms of music. And that can be translated into rock and roll, pop, jazz, blues, country, Latin, reggae…so many different styles. The more you learn about music, the better a musician you are.”

Indeed, Bissonette’s second solo album, Submarine, reflects that musical quest. Featuring 10 world-class guitarists from Steve Vai to Joe Satriani, Submarine features 11 tunes that shift from Miles Davis-styled funk/fusion to hard rock to Beatles-esque pop. Along the way, the multi-hyphenate Bissonette also tackles East Indian tabla drums, the trumpet, percussion, and lead vocals. Having studied jazz/bebop drumming with the late Tony Williams, Bissonette is presently studying Afro-Cuban drums, a desire sparked by his stint as a member of the US cultural entourage that visited Cuba in 1999.

Detroit born and raised, Bissonette got a head start on his musical journey thanks to his father, who is also a drummer, and his mother, who plays piano. “It’s great having a family that’s so into music,” Gregg says. “My brother Matt, my sister Kathy, and I, we all grew up playing in bands together. My first gig was subbing for my dad at a private party. I was 14 at the time and too young to drive, so I had to get my uncle to drive me to the gig.”

Interestingly enough, the drums weren’t Bissonette first choice — it was the guitar. “John Lennon was always my favorite Beatle when I was a kid,” he recalls. “The Beatles really inspired my excitement about going into music. But when I was 7 years old, my parents took me to Windsor, Ontario, in Canada, to see the Buddy Rich Big Band. Buddy definitely fueled my desire to be a drummer.” Besides the Beatles and Buddy Rich, Gregg’s influences include the Rolling Stones’ Charlie Watts, Mitch Mitchell, John Bonham, the Police’s Stewart Copeland, Chicago’s Danny Seraphine, Billy Cobham, and Bobby Colomby from Blood Sweat & Tears.

Following high school, Bissonette picked up his sticks and headed for Denton, Texas, and North Texas State University, along with bassist brother Matt Bissonette. During this time Gregg minored in trumpet and honed his drumming skills as a member of the One o’Clock Band. After earning a degree in music education, the 22-year-old Bissonette relocated to Los Angeles. By then his brother had landed a spot with jazz great Maynard Ferguson’s band and later helped Gregg get the gig as well. From there it was on to work with Gino Vanelli and then David Lee Roth, where Gregg first met Favored Nations founder Steve Vai. After a few years when bassist Billy Sheehan left Roth’s band, brother Matt took over on bass.

Leaving David Lee Roth’s band opened the door to a host of session and concert gigs (Joe Satriani, Andy Summers, Toto, Brian Wilson) and the formation of the Mustard Seeds, a band with brother Matt. In 1998 Gregg & Matt (described by Gregg as his favorite bass player and songwriter) collaborated on Bissonette’s first CD. The self-titled project, Gregg Bissonette, sporting drum solos on a mix of original songs and remakes, initially began as a promotional CD later licensed to the Shrapnel label in the US, Mascot in Europe, and JVC in Japan. It was this album that prompted Steve Vai to ask Gregg to record for Favored Nations.

No longer playing with the Mustard Seeds, Gregg Bissonette is by no means idle. In addition to his new album as well as having played on Santana’s multiple Grammy-winning Supernatural, the drummer’s distinctive beats can be heard on new and upcoming projects by Don Henley, Ray Charles, Carole King, and Duran Duran. He also conducts a series of drum clinics across the country for the Mapex drum company, giving back some of what he’s learned.

“The clinics attract a wide demographic from 10-year-olds to 80-year-olds,” says Gregg. “It’s wild. But drummers have a real camaraderie whether they’re from Tunafish, Wyoming or Japan. We all love to get together and exchange ideas. There’s no ego involved.”

While he’d still like to fulfill more dream gigs (Paul McCartney, Chick Corea, Sting, Tom Petty), he’s also keeping an eye on the next generation of drum-playing Bissonettes: two-year-old Noah Budd. “He loves music and already has a great sense of tempo. But I’m not pushing him. In the meantime, I’m blessed to be making a living doing some I love.”