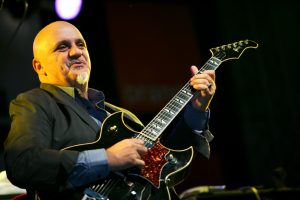 Grammy winning guitar virtuoso, Frank Gambale, exploded on the L.A. scene in the early ‘80’s. His meteoric rise to fame is a testament to his passion powered playing – a style “Rolling Stone Magazine” calls “ferocious”! Gambale is an inspired songwriter with over 250 songs published on 20+ albums. His music touches on many styles from rock,funk and jazz to R&B and some Latin and Brazillian influences. As a legendary guitarist, Gambale is the undisputed genius who originated the sweep picking technique ( a new way to play the instrument ) and elevated it to a precise art form now standard in the guitar lexicon. The “Gambale Sweep Picking Technique” continues to inspire generations of musicians. Jazz, rock, metal and progressive artists alike are united in their awe of Frank as both an amazing technician and an unsurpassed musician. As jazz legend, Chick Corea, describes Frank: “Everything you touch with your guitar turns gold – always has.&rdquo, Corea also said “Frank is my favorite guitar player”; While John McLaughlin’s tongue-in-cheek response to his finesse is “I’d like to cut his hands off. Jazz guitarist, Pat Metheny, says of Frank: “I’d like to take a month off and study with Frank Gambale; While Dweezil Zappa said, “studying Frank Gambale’s Sweep Picking technique enabled me to play the hardest parts of my father’s music that he himself didn’t play”.

A musician’s musician, gifted composer, brilliant innovator and author of numerous instructional books and DVDs, Frank continues to reach unprecedented sonic and technical heights. His six string prowess and seemingly limitless vision point towards an exciting future of ground-breaking music. Early Years Frank Gambale was born into a family of talented musicians in his native Canberra, Australia. He quickly absorbed the pantheon of ‘60’s and ‘70’s blues and rock guitar greats. As a teen, Frank’s musical horizons expanded with the influence of jazz and vocal based music under the generous tutelage of a local import record shop owner. At 17 he started playing piano and almost gave up guitar altogether. It was 2 years before he would return to the guitar at the insistence of his older brother.

He returned to the guitar with renewed enthusiasm and continues to play piano. It was a leap of faith for Frank to leave for Los Angeles, to be in the middle of “where all the music I loved was being made,” and set off to the Guitar Institute of Technology in the early ‘80’s. Meteoric Rise Frank’s shining prowess and dedication to practice garnered him “Student of the Year” upon graduation from GIT, landing him a four-year teaching gig as well as a publishing deal for his first instructional book “Speed Picking”. In 1985 he signed a 3-album recording contract and began his illustrious recording career. In the summer of 1986 he toured with jazz violin great Jean-luc Ponty. Soon after that tour his widening reputation led to an invitation by jazz legend Chick Corea to join his groundbreaking “Elektric Band.” Frank began a major endorsement with the Ibanez guitar company and began to create the FGM series of guitars, which became a very popular series. He also signed a 3 DVD contract for instructional videos. Fresh-faced Gambale graced the cover of “Guitar Player” magazine in June 1988 entitled “Fire Meets Finesse”. Some 30 magazine covers to date and reader’s poll wins and other accolades have followed. Fire meets finesse, indeed! On the Road Frank’s musical journey has taken him “at least twenty times around the world,” by his accounts with his own groups and as a collaborator with “Vital Information” and several of Chick Corea’s bands. 25 years have produced over 20+ solo records, another 9 with his 16 year collaboration with Vital Information, 3 blazing albums with his off-shoot project, “Gambale, Hamm, Smith,” as well as dozens of other guest record projects. His fruitful 25+ year alliance with Chick Corea has totaled 6 recordings and a live DVD recorded at Montreux Jazz Festival and garnished aa Grammy Award and 2 Grammy Nominations. World tours with drum legend, Billy Cobham, led to Cobham’s enthusiastic participation on Frank’s album, “Raison D’Etre,” which introduced Frank’s “Gambale Tuning System” to the world. Sweep Picking and Guitars Nearly 40 years seeped in all things guitar, Frank discovered his revolutionary “Gambale Tuning.” This system aligns the chordal capabilities of piano onto a reachable and familiar fret board – yet another of his monumental contributions to the guitar alongside the Sweep Picking Technique.

Yamaha quickly jumped in to arm Frank with a new double-neck guitar, necessitated by the quick change-over in tunings while flying on the new adventurous tracks. The new Frank Gambale DV Mark Signature line of amplifiers fires up the incredible new Gambale Signature FG1 Guitar by Carvin corp. This semi-hollow guitar was a year in the making at Carvin’s Custom Shop. Frank’s instructional materials are used in many schools and universities throughout the world. His mystifying sweep picking technique, featured in his first instructional book and masterfully demonstrated in the Monster Licks and Speed Picking video, continues to amaze and inspire guitarists. Frank generously conducts master classes around the world. On the road in 2011 In 2011, the all-star “Return to Forever IV” (Chick Corea, Stanley Clarke, Jean- luc Ponty, Frank Gambale, Lenny White) ignited the greatest stages around the world with over 100 concerts starting in Australia which included a performance at the famed Sydney Opera House. The World Tour culminated in November at the renowned Blue Note in New York with an acoustic performance of RTF-IV (Chick Corea, Stanley Clarke, Frank Gambale, and Lenny White) marking the beginning of Chick Corea’s month-long appearance at the acclaimed venue to kick off the celebration of his 70th birthday. The “Elektric Band” closed the month-long birthday bash, playing to sold out shows reuniting all the original members of this iconic Grammy award winning group featuring Chick Corea, Frank Gambale, Eric Marienthal, John Pattitucci, and Dave Weckl. Newest Release in 2012 2012 brings more terrific new directions for Frank Gambale that will delight dedicated fans and new audiences alike.

An album Gambale’s wanted to make for 30 years, his newest release “Soulmine” is a return to Frank’s vocal roots, and the first collaboration with inspirational songstress and muse, BOCA. Gambale and BOCA wrote, arranged and produced this release that features Boca’s sexy, strong and evocative vocals and inviting lyrics luring listeners to “stir their soul”, and Gambale’s soulful guitar playing and signature sweep-picking prowess throughout this Adult Contemporary Album. “Soulmine” has seriously catchy tunes punctuated with shining vocal harmonies, unexpected sass, funky rhythms and saucy guitar lines. The delicious guitar tones that tie the new tracks together are complimented by the combination of the new Frank Gambale DV Mark Signature line of amps firing up the incredible Gambale Signature FG1 Guitar by Carvin’s Custom Shop. The Frank Gambale Soulmine feat. BOCA is Frank’s remarkable new release. A Soulmine World Tour starts in Europe in June 2012. The first single, “Forbidden Kiss,” hit the radio waves and video channels in January 2012. Released on www.Youtube.com and FrankGambaleTV (FGTV), the video for “Forbidden Kiss” was created and directed by the legendary Nigel Dick. This award-winning, British born filmmaker boasts a resume of more than 300 music videos, multiple commercials and numerous films.

His creativity and vision enhances the key elements of musical expression and sensuality that comes through Gambale and BOCA’s collaboration. 2014 Gambale continues to tour with his various groups. His group Soulmine has already graced jazz festival stages from Mexico to the Canary Islands. Frank is currently preparing hours of video for his upcoming online school and writing for a second Soulmine album.Whether Gambale is touring the world with his Fusion Jazz Trio, the Natural High Trio, his new vocal group Soulmine, or joining forces in an iconic jazz super group, Frank continues to amaze audiences around the world.