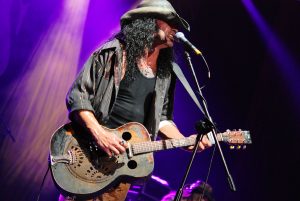 On his fourth album, Eric Sardinas and Big Motor, the artist delivers a powerful musical statement that stands as his most accomplished release to date, fueled by a wily sense of adventure, imagination and ferocious lead guitar finery. Honest, soulful and fire-branded with a gritty passion, Eric Sardinas is the real deal, infusing his music with an embattled spirit, reconfiguring deep southern blues with the finesse of a master.

Picking up the guitar at the age of six, Sardinas reaped a heavin’ helpin’ of inspiration from a melting pot of influences numbering R&B, gospel, rock and roll and most tellingly, his profound love of traditional blues forms. All inform the songwriting and incendiary playing on the new album. And while those influences inexorably shape his playing he’s no mere mimic. Instead, he’s absorbed all those styles into his DNA, reinterpreting them into his own driving contemporary blues/rock sound. On the new record, helping to power Sardinas’ musical engine is a crack rhythm section featuring the driving bass of Levell Price and drum thunder of Patrick Caccia.

Produced, engineered and mixed by Matt Gruber, the CD kicks into overdrive with the propulsive kick of the opening cut “All I Need,” the musical ride accelerating into top gear, blowing rubber at 100MPH. A relentless groove, Sardinas’ earthy vocals and tasty slide guitar make this the perfect introduction. “The swampy introduction is kind of a metaphor for the big motor sound coming at you,” attests Sardinas. “I wanted the songs to take you on a ride.”

Gospel meets Texas rock on “Ride”, “Door To Diamonds” is the ultimate kiss-off to a spurned lover while “Find My Heart” pile drives the listener with walls of explosive guitars, soulful vocals and contagious energy.

“Listen, can’t you hear that train, coming down the line now and calling my name” croons Sardinas on “Gone To Memphis”, a more lyrically reflective track, earmarked by contours of melodic innovation, impassioned singing and an arresting, hooky chorus that refuses to leave your brain. “‘Gone to Memphis’ is not literally about walking out the door but already being through it,” asserts Sardinas. “It’s more about mentally moving forward and doing what it takes to make those moves. Memphis is a big part of my psyche so I used it in the song.”

Opening with the strains of a live audience, a snarling lick drives “Just Like That,” a gut-busting blues stomper characterized by the artist’s jaw-dropping dive-bomb slide guitar pyrotechnics, which reflect his love of Son House and Robert Johnson.

An amphetamine paced rootsy take of Elvis Presley’s 70’s smash, “Burning Love” updates “The King’s” slice of gold with dobro flavored ferocity. “It’s a beautiful and honest song and one I grew up with,” said Sardinas. “The simplicity of the message belies a complexity and that appealed to me.”

Setting the scene on the closing track is the lonely sound of the swirling wind whistling through the fields, the Tony Joe White penned “As the Crow Flies” is the record’s tour-de-force. The song’s glorious wide-screen sound serves as a showcase for Sardinas’ emotional vocal and dobro playing before racing toward the finish with the rhythmic thrust of layers of acoustic and electric guitars.

You don’t need a weathered road map or expensive GPS system to navigate your way through the 11 musical signposts on Eric Sardinas and Big Motor. So what are you waiting for? Rev this baby up, crank the motor, and take it out for a thrilling musical ride you’ll never forget…