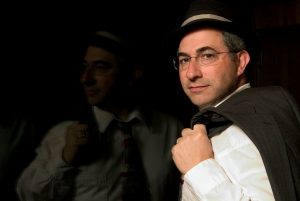 Every December, the holiday season gets swingin’ with Hanukkah Swings! Kenny Ellis–a multi-faceted musical performer and cantor–makes Hanukkah hip for pop, jazz and big band lovers with his Favored Nations’ Cool debut Hanukkah Swings! A joyous labor of love reflecting Ellis’ lifelong affinities for Jewish culture and swing era legends Count Basie, Les Brown and Benny Goodman, Hanukkah Swings! features Ellis on lead vocals performing lively, jazzy twists on festive classics (some done in medley form) in English and Hebrew. One song has a dash of Yiddish tossed in on the humorous parody “Twas The Night Before Hanukkah,” whose lyrics are complemented by a dashing jazz/blues piano solo by co-producer Stu Goldberg. The collection, which includes two original pieces, the lush orchestral ballad “Hanukkah Candles” and the fun-filled tropical flavored “Hanu-calypso,” features brilliant ensemble arrangements by Emmy Award winning composer/arranger Harvey R. Cohen, arranger and co-producer of Hanukkah Swings! Heavily involved in Jewish Education for many years, Ellis has spent a lifetime finding new and creative ways to forge connections between young children and their heritage. “Part of my life’s work has been discovering new entertaining avenues to show what Jewish life can be, and this time I happened to put it in a package that includes my deep love for the big bands my father loved and exposed me to when I was young. It’s a celebration of Jewish life and music, not just for people of our culture and faith, but for everybody. It’s Hanukkah for everyone, and you don’t have to be Jewish to sing along!”

Every Jewish kid remembers spinning the little top and learning the quintessential (and perhaps best known) Hanukkah song, “I Have a Little Dreidel,” adapted on Hanukkah Swings! as the vibrant, bold and brassy opener “Swingin’ Dreidel.” But how many adults have come out of the shower singing it? Ellis explains, “I performed at a lot of cantor’s concerts and asked everybody if they knew a great “big band” arranger, and before long, Harvey and I were tracking Swingin’ Dreidel’ and Ocho Kandelikas,’ a fun, Latin salsa-inspired number whose lyrics are in Ladino, the native language of many Sephardic Jews from Spain,” he adds. “It’s actually a children’s counting song put to a cool sound for fans of Latin music. Harvey and I shared the same love for Basie and Les Brown, and our third collaborator, Stu, is a great pianist and producer who knew how to get the best performances out of me. It all came together beautifully. The minute people heard it, they went crazy for it and wondered why it wasn’t on the radio. Now that we’re rolling, that’s the next step.” Once the project was in full swing (pun intended), Ellis worked intricately with Cohen to give the collection variety from track to track. The result is a vibrant blend of jazz, big band and small ensemble pieces that blend tradition with wit, wisdom, and a Jewish spirit. Hanukkah Swings! features two medleys of traditional pieces: “Hanukkah, Oh Hanukkah/Who Can Retell”; and “Hanukkah Swingin’ Holiday/Pour the Oil”. In addition, “Sevivon Spin and Turn”, and “Children of the Macabbees” were written with a melody from the Italian Renaissance and utilizing a seamless blend of classic Hebrew folk and finger-snapping classic jazz sounds. The album also includes the perennial and universal Hanukkah favorite, “Maoz Tzur/Rock of Ages,” set here to a cool big band vibe. Born and raised in Philadelphia, Kenny Ellis is a graduate of Temple University with a Bachelor of Arts degree in Theatre Arts and also holds a certificate of Hebrew Education from Gratz College. He was a hit on the social engagement scene from the time he formed his first band in his late teens while working at many famous venues including Jewish Community Centers and synagogues in the New York-Philadelphia area. Moving North to New York City to seek fame and fortune, he started auditioning for Broadway musicals by day while at night, honing his comedy/variety act at various clubs like the Copacabana, The Improv, and even the Kosher French restaurant in the Roosevelt Hotel where he sang with Rabbi Shlomo Carlbach, of blessed memory. Ellis branched out to the hotel circuits in the Catskills, the Poconos, Atlantic City and in Miami Beach. During this time, Ellis also began traveling to Israel, where he performed on Kol Yisrael – Israel National Radio – and was enthusiastically received at many kibbutzim, nightclubs, hotels, army camps and hospitals. Ultimately settling in the Los Angeles area, Ellis performed for many Jewish Community Centers, synagogues and organizations.

He has been the M.C. for the L.A. Jewish Festival for over ten years and he has been the M.C. for the national CAJE (Conference for Alternatives in Jewish Education) conferences since 1992. His performance that year of his Perry Como “It’s Impossible” parody “It’s a Matzoh Ball” took his career to a whole new level as the demand from the Jewish community grew; he performed the song all around the country at scores of synagogues, JCCs and other functions. In addition to all of his performing and teaching, Ellis has been the cantor at Temple Beth Ami in Santa Clarita, CA where he loves working alongside Rabbi Mark Blazer. Ellis and his wife, Laura, a classical flutist and special events coordinator for a local hotel, have been married for twenty years. They are the proud parents of two sons, Adam and Aaron. “I have always wondered why some Jewish performers shy away from embracing this incredible heritage, but I have always chosen to bring that into every one of my creative endeavors,” says Ellis. “I grew up in a culturally Jewish home hearing my Lithuanian grandmother and my father’s parents talk about life in the old country, and I was profoundly moved by their experiences. The music on Hanukkah Swings! is part of what makes me who I am, and I hope everybody finds enjoyment, excitement, and love from the music. I’m proud not only that I have been able to share this music, but that we did it with class and originality. No matter your religious or cultural background, it’s bound to make the holiday season more festive and a lot more fun.”