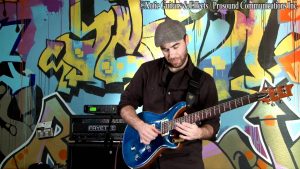 At his shows, you can sometimes hear fans chanting his name, “Weiner, Weiner, Weiner.” If you didn’t know any better, you’d think it’s an insult; it’s not. For guitarist Dave Weiner, it’s the sweetest music to his ears. After touring around the world as a supporting guitarist for Steve Vai’s band, Weiner has built up a faithful following that knows him by name. And for many young guitarists, that would be plenty. But to Dave, he wanted more. And he had a creed to live by.It sounds so simple: a young guitarist studying music in LA answers a vague-sounding ad about office work. Suddenly, he’s working for the manager of one of his musical heroes. And that hero somehow winds up hearing the young guitarist’s self-produced demo and invites the young man to join his band and tour the world. But because this young guitarist is Dave Weiner, there’s more to the story. In short, there’s a dynamic solo album, SHOVE THE SUN ASIDE, and it’s the pure product of determination, abiding love, and enormous talent.

He knew the music was in him. But instead of waiting for the music world to invite him into the perfect situation, he created it himself. Over the course of two-and-a-half years, Dave Weiner spent his downtime from touring writing and honing an album’s worth of songs, and learning everything there is to know about recording, producing, and engineering an album himself. It’s all part of the way Weiner sees life and its challenges. It’s what SHOVE THE SUN ASIDE is all about. Says Weiner, “If I want something, I do whatever it takes to get it. If something has to be done, I do whatever it takes to accomplish it. I try to live by this creed in every facet of my life.”

Still, these days, nearly anybody can record his own music. Creating something original and enduring is yet another matter. And that’s where Weiner’s approach to songwriting comes in. With a melodic style all his own, he creates a series of “sonic pictures” throughout, subtly shifting instrumentation and textures. The soaring opening track, “Andonova,” provides an aerial overview of landscapes to come, lush and full of promise, and it bursts dramatically into the driving and kinetic “Long Run,” a piece that darts in and out in between movements more like a symphony than a rock song. Notes float on the air, often spare and deliberate, sometimes striking in a burst of light.

Despite his status as a newly anointed guitar god, Weiner’s approach to guitar playing always honors taste and melody above flash and thrash. In short, he’s more concerned with constructing a solid, original song, than with seeing how many notes he can shove into it. That’s why tunes like “Long Run” and the epic “The Ghost of Denmark St.” find their musical marks and don’t let go. Each song leads the listener along gorgeous musical landscapes, with the notes of the guitar confidently leading the way. Still other tunes, like the blissful “Monument Shine,” take a melodic hook and build it to a fevered pitch.

Weiner didn’t go it entirely alone on this outing. With virtuoso performances from bassists Philip Bynoe and Graeme Rappaport, and drummers Virgil Donati and Steve Wilson, SHOVE THE SUN ASIDE offers some brilliant trio work that defies its home studio roots. Still, it’s Weiner’s guiding hand throughout that brings it all to someplace new, someplace beyond the conventional.

It’s a tall order: creating music that transcends the line between the inspirational and the technical, and writing, performing, engineering and producing it all yourself, all this while working alongside one of the greatest living guitarists. But then, it’s all very much in keeping with Dave Weiner’s creed of doing the impossible. It’s like “Shoving the Sun Aside.”