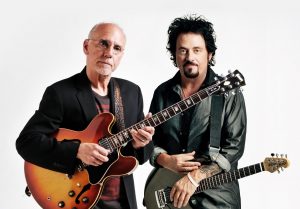 Universally acknowledged as one of the true pioneers of fusion music — a bona fide guitar hero who comfortably straddled the jazz-rock divide and whose inventive rock-fueled licks blazed a new trail for guitarists in the late ’60s and early ’70s — Larry Coryell is and always has been at heart a jazz player.

A native of Galveston, Texas, he spent some time developing on the Seattle scene before arriving, Gibson Super 400 in hand, in New York City in 1965. A disciple of Wes Montgomery who was also steeped in the swinging jazz guitar tradition of Kenny Burrell and Barney Kessel, Coryell got seduced by the spirit of experimentation that was swept in with the Beatles, Cream and the Jimi Hendrix Experience. As he recalled in a 1984 interview for Down Beat: “We were in the middle of a cultural revolution. Everybody was dropping acid and the prevailing attitude was, ‘Let’s do something different.’ That spirit, that desire, that visionary thing is what was happening among musicians, and the results were great.”

While his early envelope-pushing experiments have been well documented — tenures with Chico Hamilton’s band, Gary Burton’s quartet, the proto jazz-rock band Free Spirits and his own volatile Eleventh House before turning to the purity of acoustic guitar in the mid ’70s — Coryell has been primarily involved in playing straight ahead jazz for the past 20 years. During that time, he has released a string of consistently strong recordings marked by his unerring sense of swing and improvisational daring, an inherent bluesiness that comes from his deep Texas roots and a high degree of interplay with his various groups, which have included such stellar jazzmen as pianists Albert Dailey, John Hicks, Kenny Barron, Ronnie Matthews and Cedar Walton, bassists George Mraz, Santi Debriano and Buster Williams, drummers Billy Hart, Billy Drummond, Beaver Harris, Yoron Israel and Marvin “Smitty” Smith. He has made several headlining appearances at prestigious New York jazz venues like the Village Vanguard, Iridium and the Blue Note and has remained a major touring attraction throughout Europe, South America and Japan.

They open with Larry’s swinging mid tempo blues “Immer Geradeaus,” paced by Egan’s walking bass and Wertico’s insistent ride cymbal and unpredictable snare work. Larry cuts across the grain here with his note choices and edgy attack before settling into some Wes-inspired octave work. Egan’s facile bass solo here is a fluid, low-end marvel. Their rendition of Coryell’s previously recorded “Dragon Gate” (the title track of his 1989 album and also featured on 1997’s Spaces Revisited) is a challenging intervallic workout based on Wayne Shorter’s composition “Footprints” that showcases some creative exchanges between Coryell and Wertico, who also erupts into a flurry at the tag. “Good Citizen Swallow” (originally recorded on the Gary Burton Quartet’s Lofty Flake Anagram from 1967 and reprised on Coryell’s 1984 album, Comin’ Home) is a classic example of the guitarist deftly placing one foot in the more visceral rock camp while striding confidentially into the jazz camp with the other. Wertico and Egan respond accordingly with flexible playing that summons up both rock intensity and jazz syncopation. Egan also reveals a decided Jaco Pastorius influence on his stunning fretless solo here.

Mark Egan’s title track, a hauntingly beautiful minor key ballad, brings out some of Coryell’s most lyrical playing of the session while Larry’s “Stable Fantasy” is a showcase for his dazzling, bop-styled soloing. “Spaces Revisited,” the title track of Coryell’s 1997 album, opens with a dynamic extended drum intro from Wertico before resolving to the familiar chops-busting theme. Once again, Wertico and Egan prove to be a remarkably in-synch rhythm tandem as they groove throughout the uptempo swing portion of the tune in such a tight manner that Larry is freed up to launch into his edgiest, most adventurous solo of the session. And Wertico wraps things up with a thunderous solo that highlights the rocker side of his expansive vocabulary.

Coryell, who regularly pays homage to the genius of Thelonious Monk in performance, tips his hat to Monk twice here — on a gorgeous, reverential rendition of “‘Round Midnight” and also on a spirited, swinging romp through “Well You Needn’t.” “Three Way Split” is a spontaneous jam in the studio that results in some particularly provocative moments and he closes the album on an intimate note with a gentle solo acoustic rendition of the Beatles’ affecting ballad, “She’s Leaving Home.”

In over 100 recordings over the last 40 years — for the likes of Charles Mingus, Jimmy Webb, the Fifth Dimension, Herbie Mann, Chick Corea, Stephane Grappelli, Sonny Rollins, Michal Urbaniak, Don Sebesky, Leon Thomas, L. Subramaniam, Teo Macero, Jim Pepper, Emily Remler, Red Rodney, Billy Cobham, Randy Brecker, Sir Roland Hanna, Paco De Lucia, Chet Baker, Lenny White and Louis Bellson — Coryell has distinguished himself as a world-class guitarist. But it is ultimately in the context of his own recordings as a leader that he reveals the real depth of his multi-faceted musicality. And on Tricycles, he’s at the very top of his game. As he recently said, “One is never totally happy with one’s playing but I do feel that I’m swinging harder and playing more lyrically than ever before. I’m just trying to follow the rules of jazz. There’s a big difference between playing the guitar and playing jazz music. I feel like I’m going for more music now. And I find myself going back more and more to Wes (Montgomery) for my inspiration.”

At age 61, the legendary guitarist is right on top of his game, playing with a masterful balance of fire and finesse, clarity and conviction. And in the company of Wertico and Egan, he takes it up a notch on Tricycles.