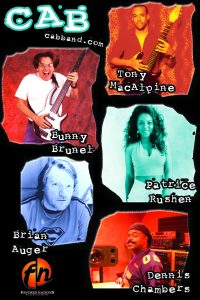 So are the members of CAB, and they’re doing something about it. Think of this quintet as music’s answer to the Justice League, each one endowed with superhero powers and sworn to bring excitement back to the bandstand.

For CAB consists of guitar monster Tony MacAlpine, bass wizard and Return To Forever alumnus Bunny Brunel, legendary British organist Brian Auger, elegant and ingenious keyboard innovator Patrice Rushen, and the force-of-nature, played-with-everybody, unstoppable rhythm dynamo Dennis Chambers on drums — each a giant on his or her own terms. Together, they are unlike anything heard since the glory days of jazz-rock fusion…

Saving the number title “3” for an upcoming live album, CAB4 is an incendiary collision of rock, jazz &amp; passion with blinding chops. CAB is, in fact, something like what jazz might have become had the torch not been dropped so soon after the fusion race had begun. That long-gone sense of limitless possibilities that once surrounded RTF, Weather Report, and the Mahavishnu Orchestra traced back to Miles Davis and his crossover experiments in the sixties. In its willingness to question stereotypes, redefine improvisation, and push virtuosity to new extremes, this music was akin to bebop; as the product of exploration by the best players of the day, it represented the best of jazz, period.