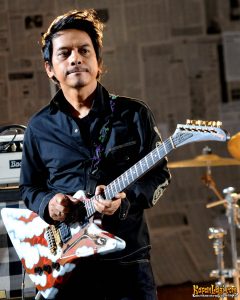 Dewa Budjana is no stranger to the big stage. He’s widely considered one of the greatest artists in Indonesia, the worlds 4th most populated country, and has achieved international recognition by guitar greats like Carlos Santana and John Frusciante as being one of the instrument’s most proficient players. His original group in Indoneisa, Gigi, sold millions of records while they were together and Dewa has built upon this legacy into his solo career.

The new album, ZENTUARY, is a sprawling jazz/prog epic that spans two discs, taking the listener through the various elements of Budjana’s style. He is an expert at blending in the standard aspects of prog and jazz with the sonic influences of his home country, creating a unique sound with many twists and turns. While a double album can be a tall order, Budjana’s enlisted the help of heavy hitters Tony Levin, Jack Dojohnette, and Gary Husband to make the songs biting and intriguing with every instrumental part proving vital. The album is sure to be essential listening for fans of the genre.

The album’s release coincides with the beginning of another special project for the famed guitarist. Museum Gitarku is scheduled for opening in Indonesia in the middle of 2017 and will feature Budjana’s collection of over 200 guitars, many signed by legends like Steve Vai, Buddy Guy, Sting, and more. Being a cultural icon in Indonesia, the museum will serve as a way for Dewa to give back to his community as well as be a destination for guitar aficionados around the globe. In this regard, Zentuary serves not only as a major release for the artist, but also as a launch pad for the next phase of his cultural legacy.