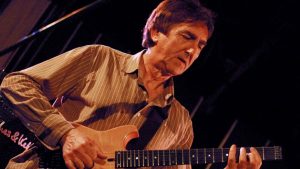 L.A. Times jazz critic Don Heckman raves, “He’s an unlikely guitar hero whose phrasing has much in common with the expressions of saxophonist John Coltrane.”

Heralded as a guitar visionary, for the past four decades, Brantford, England born, Allan Holdsworth, has reshaped, reconfigured and rewritten the parameters of music with his groundbreaking six-string work. His mind-blowing technique combined with his distinctive tone and boundless creative imagination has helped garner Holdsworth considerable notice as the consummate musician.

Marking Holdsworth’s first official live recording, All Night Wrong (his 17th solo release) signals yet another magnificent chapter in the artist’s ongoing musical saga. Released on the Favored Nations label, the record, produced by Akira Yada, was recorded on May 5, 2002 at the Roppongi Pit Inn in Tokyo, Japan. Convincing Holdsworth to release a live album took a fair amount of persuasion. “I always felt about live recordings the way that Indians feel about having their photograph. They felt it was like stealing something from your soul. Most live recordings sound like bad studio records. For me, a live performance was for the people that were in that room at that time and at that point in history and for nobody else.” The actual act of recording a live album made Holdsworth apprehensive. “I’m always terrified about playing live,” the guitarist reveals. “I get really nervous. I get the ‘red light’ factor. As soon as I hear someone’s recording it I just fall apart. I’ve always been that way. It was a very fearful decision for me to put out a live album.”

Recording a live album duly presented a major challenge to the guitarist. “I like playing live gigs. I like touring. I like traveling. But with regards to recording, I much prefer a studio environment. When the red light goes on in a studio, it’s different than it is in a live performance. You can focus more in the studio. There are all of these distractions at gigs like some guy spilling his beer in the front row or a girl bending over with a short skirt on (laughs). It’s hard to relax and get into it. I also find undo pressure to live up to people’s expectations.” Recorded direct to two-track, the album features no overdubs. Explains Holdsworth: “Not only was it live, it was mixed live to two track using the Super Audio CD format. So you can’t fix anything, you can’t even re-balance anything. But I said, ‘Okay, what the hell, let’s try it.’ We recorded both nights at The Rippongi Pit Inn but there were a lot of problems with the second show. So we used the first night, which was just the warm-up, and that’s the record.”

The impeccable rhythm section of bassist Jimmy Johnson and drummer Chad Wackerman further bolster Holdsworth’s spectacular guitar stylings. “I’ve played with Chad Wackerman for many many years. Frank Zappa recommended that I audition Chad. I love playing with Chad, he’s great. The thing that I look for in all of the musicians that I’ve worked with is they all have a really unique personality. They don’t sound like anyone else. You recognize Chad’s playing right away, same thing for Jimmy Johnson. Jimmy’s like the biggest anchor you can ever imagine.” Slinky and sophisticated, challenging and ambitious, All Night Wrong does everything right, creating an arresting panorama of instrumental magic. The joy that resonates through the music is palpable and infectious. This is music with a heart, music without walls, music that makes a difference.

Experience the stately grace of “The Things You See,” thrill to the incandescent swing of “Water On The Brain Part II” or revel in the intergalactic majesty of “Gas Lamp Blues.” Quite simply, the 57-year old Holdsworth has never sounded better. Like a master painter, the understated elegance of Holdsworth’s liquid guitar lines effortlessly weave and circumnavigate through the contours and textures of All Night Wrong.

Universally revered for his landmark work in The Soft Machine, UK, Tempest, and as a solo artist, Allan Holdsworth is a guitarist’s guitarist, eschewing stardom in favor of pure unfettered creative expression and fearless instrumental exploration. Since first coming to global prominence, Holdsworth has reinvented how many perceive the art of guitar playing. Bestowed with every imaginable accolade and honor including induction into the Guitar Player Hall Of Fame, Allan Holdsworth continues to dazzle his loyal followers, thriving and surviving on the challenge of continued musical growth and evolution. “I always strive to be a better guitar player. I’m never satisfied with my playing. Never. I think the guy who is satisfied is falling real short. I don’t think you can ever get there. You’ve gotta just keep moving forward.”