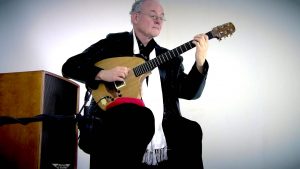 Following another stint in an Irish show band based in Dublin, Legg moved back to London and continued to gig in bands that played clubs and pubs and toured around and outside Britain. When one bandleader asked him to play acoustic guitar chords up against a microphone, he became fascinated with the notion of blending the tonality of an acoustic with the amplified power of the electric guitar. Thus began an electro-acoustic quest that continues today to find the holy guitar grail that melds tone, technique and technology to allow him to create, perform and record the music his imagination envisions, eventually incorporating synthesizers and computerized MIDI programming to augment and enrich his one-man musicality. “I wanted something that had the harmonic content roughly like an acoustic, and that had the flexibility in terms of stringing and volume levels, whatever you wanted to do, of an electric,” he explains. Starting to gig as a solo artist in the mid 1970s, Legg won a Guitar magazine solo acoustic competition in both the composition and performance categories, and began writing articles for that magazine and other guitar publications (and later Guitar Player in America), plus authored his first of a number of books, The All Round Gigster.

He released his first of five albums in Britain in 1976. Soon after he began working for Rose Morris & Company’s musical instrument and equipment store on London’s legendary Denmark Street music business strip doing guitar repairs, quality control and manufacturer contact. That led to collaborations and consultations with numerous guitar makers and amplifier and pickup manufacturers and technicians over the years as well as guitar clinics and product demonstrations at musical instrument and equipment shows in Britain, Europe and later America and Japan. His compositions began being used by English radio and TV programs, and London’s Ballet Rambert also choreographed one of his songs as a dance piece. With his 1990 American recording debut on Guitars & Other Cathedrals, Legg found even greater success across the pond as a regularly touring solo act, headlining and sharing bills with fellow guitarists Richard Thompson, David Lindley, Eric Johnson (whose 2005 album Bloom Legg plays on) and Joe Satriani (on both his own shows and as part of his G3 Tour package with Johnson and Steve Vai, whose Favored Nations record label released two Legg albums). Guitar Player named his records Guitar for Mortals and Mrs. Crowe’s Blue Waltz as Best Acoustic Album (1992 & ’93) and Wine, Women & Waltz as Best Overall Guitar Album (1994) in its annual readers’ polls. He has three instructional videos on the U.S. market (Beyond Acoustic Guitar, Fingerpicking & Open Tunings and How To Cheat At Guitar) as well as two books (Customizing Your Electric Guitar and a collection of his compositions in tablature and standard notation, Pickin’ and Squintin’). In addition to his commentaries for “All Things Considered,” the popular public radio news show regularly uses a number of his varied guitar interpretations of its theme music.

Throughout his career, he has earned the highest praise from the media. “Legg is, above all, a guitarist of great power, invention and versatility,” observes the St. Petersburg Times. “Through fast-fingered picking, spontaneously layering parts and occasional ringing harmonics, he sounds like an orchestra.” Guitar Player heralds how he “combines a sublime melodic sense with a mighty right-hand groove, creating pretty music with rhythmically aggressive undercurrents,” while Acoustic Guitar notes that “the guitar is the most versatile instrument in the world, and nobody demonstrates this better than Adrian Legg.” But the Atlanta Journal-Constitution likely summed up his impact on listeners best when it exclaimed, “Mr. Legg’s compositions, with their narrative melodies and nakedly emotive tones, offer an antidote to the guitar-hero syndrome.” For Legg, the fulcrum and essence of his creativity is in live performance. “Playing live is the whole point,” he stresses. “Everyone makes a journey, an effort; we all come together — me, the audience, the people who run the venue — to share this wonderful, universal, human emotional interaction. This is where music lives. “Before we had all this mechanical stuff that’s what we did,” Legg notes. “We got together and did it ourselves, or somebody came and did it for us. Everybody is involved in some kind of effort for that to happen. So everybody contributes to the musical event, and everybody is engaged in it. It has a huge social value which I think is very important.”

Described by Audio magazine as a “kind of cross between Robert Fripp and Garrison Keillor,” Legg is a genuine entertainer who excels at not only painting pictures if not frescoes and telling stories with music but also wittily regaling his audiences with tales from his life and travels and his cogent and often oblique yet thought provoking observations on a spectrum of topics. It’s all part of his dedication to making his performances a full-blooded emotional experience. “If you haven’t shared a laugh with someone,” he insists, “you certainly can’t share a tragedy.” So it’s no wonder that popular BBC radio personality Andy Kershaw says of Legg, “Quite simply, there is no one else like him,” citing his “dazzling technique and equally large dollops of spirit, humor, passion, eclecticism and spontaneity.” For his part, Legg appreciates all the praise, but views his mission as far more basic, and more than anything else an expression of his soul and humanity. “I don’t see what I do as particularly eclectic; I see it as perfectly normal. In terms of the music that has gone before me, I simply reflect my forebears like every other musician.” The results of that approach, however, are simply irresistible and unforgettable.